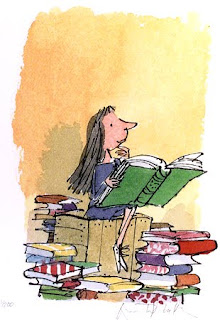 by Sebastian Meschenmoser (Kane Miller)
WHEN I GROW UP by Leonid Gore (Scholastic)
WHERE TEDDY BEARS COME FROM by Mark Burgess, illustrated by Russell Ayto (Peachtree)
WHO WILL I BE, LORD? by Vaunda Micheaux Nelson, illustrated by Sean Qualls (Random House)
WHO WOULD LIKE A CHRISTMAS TREE?: A TREE FOR ALL SEASONS by Ellen Obed, illustrated by Anne Hunter (Houghton Mifflin)
WINK: THE NINJA WHO WANTED TO BE NOTICED by J.C. Phillipps (Viking)
THE YELLOW TUTU by Kirsten Bramsen, illustrated by Carin Bramsen (Random House)
YUMMY! EIGHT FAVORITE FAIRY TALES by Lucy Cousins (Candlewick)

Picture in header from Matilda

by Roald Dahl, illustration by Quentin Blake,
Links are provided for informational use. Don't forget to support your local bookseller.
More Esmé stuff at www.planetesme.com.

Impeccable timing, for a tasty list. I still have kids from this last semester's Moms/Tots class (Garfield Park) who start conversations with "Duck! No, rabbit!!"

Wow, what an incredible list! How did you narrow it down? There were so many great titles. I would add one for our consideration: How Oliver Olson Changed the World. Great characters, lots of layers ... fun, fun stuff.

I am WAY late seeing this list, but delighted to find Maggie's Monkeys, my first picture book, made the cut -- amid such great books by so many authors I love. I'm honored.