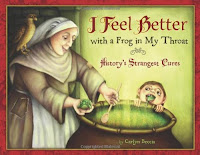 “The idea for this book came from my delight traveling in a country very different from my own. At the time, in my own country, there was much political poisoning of attitudes of foreigners and foreignness. But traveling along in remote Morocco, a woman 'stranger' myself, I was met with much friendliness and generosity from 'strangers.' The idea for the book was right there: that outward appearances may be very different but the inner person of a 'stranger' may not be a stranger at all.  Like each other, we live to be loved by family and friends and to be a part of a larger family, a community.  Inwardly we are so alike, it could be each other we see when we look in a mirror."
- Jeannie Baker

Get ready for something out of the children’s book “box.” Two parallel stories of two families: one in urban Australia, one in Morocco. When you open the single book, two bound texts are revealed, one on the front side of the binding and one on the backside, one you follow right to left, the other, left to right, in mirror image, with pages to be turned at the same time. In this way, we go wordlessly through an average day for both families, both involving shopping, one side featuring a boy’s trip to the mega hardware store in a shopping mall, the other to a sandy desert market. Not since Mistumasa Anno’s ALL IN A DAY has parallel timelines gotten such unusual play.

Jeannie Baker is a seasoned children’s book illustrator (some teachers may recognize her earlier work, WHERE THE FOREST MEETS THE SEA

from rainforest units). I hope it can be appreciated what a major, major undertaking this latest work must have been. Even the conception of the project, requiring some reader acrobatics decoding narratives in two different directions, literally and figuratively, redefines in some way the structure and expectation of a book. The wordless text gives the story universality, with a storyline intended clearly to unify, while never sacrificing the cultural integrity of each country represented. But whoooosh, look at that art, meticulous paper cut and collage on every page, integrating sand, tin, wood, plastic, clay, paint and vegetation. The whole world seems in this book, and fittingly so; most of all, this is a book about love of the world, in it’s sameness and its differences. It doesn’t require us to believe everyone is “just like us” in order for us to love them and want them to be free.  At the same time, the book allows us to notice our commonalities in a real world context. The story ends with the Australian boy’s imagination being lifted by thoughts of a “magic carpet” imported to and bought at the hardware store, while the Moroccan family is swept away by their own market purchase: a desktop computer. It is interesting she chose to end on that note, albeit subtle, where the Westernized family is still holding to outdated stereotypes of the Arab world, while the other family, for all the isolation of the landscape, is moving forward toward the technological age; but rather than reading as an accusation, it comes off as an invitation to an updated global view. Teachers, students can research other countries and cultures to create a similar parallel illustration, a picture that tells a thousand words.

In a world of electronic beeping and booping, buttons to press and glowing screens, this is a straight-up analog book for the 21st century. It deserves way more buzz than it has been getting, and though the author's nationality might get it tripped up on the residency criteria of “most distinguished contribution to American literature,” I hope the award committees are on the alert for how to give this American edition its due in the states; it reminds me of the year Robert Sabuda created his first big pop-up, ALICE'S ADVENTURES IN WONDERLAND

, requiring hundreds of hand-carved block plates and probably deserving of a Caledott and a half, but might have been considered a “novelty book.” Please pay attention, ya’ll. (7 and up)
Also of interest:
They say a journey of a thousand miles begins with a single step.  It can begin with a single page, too!  Encourage your young readers to atke a trip around the world by exploring titles on the "Book a Trip Around the World" list, here!  Teachers, make passports with a page for every continent, and rubberstamp pages as they read books from particular locales.  How far can children travel with books?

Little Ella Kate Eming didn’t stay little for long. Due to a gland disorder that was poorly understood by the doctors of the late nineteenth century, she sprouted up like the tallest sunflower, ultimately over eight feet. In her small town in Missouri, she was able to find friends and had parents who cared for her dearly, building her a special desk for school, hemming her dresses longer and longer, and always advising her to “stand straight” instead of hiding her difference. All the same, some painful teasing makes it so she stays close to home. When a man from a museum approaches her with an unusual gig, will she cower or come into the spotlight? One of the most heartwarming parts of the story is when Ella Kate can finally afford to build a house to her specifications, and can really be at home, in her own place and her own body. First-person narrative helps to bring Ella Kate to life, and makes all the more palpable the pain of the moniker of “freak,” but also makes her victories glow all the more brightly, a woman who traveled, earned money and had great and unique adventures when few opportunities were available to women of any size. The matte acrylic illustrations are folksy but still manage great feeling, with varied layouts that maintain interest and compliment the action throughout. This is a book about a true hero, inspiration and rare spirit, executed with a great and contagious affection and admiration for its subject. What child doesn’t feel different in some way, and wouldn’t be fortified by such a story? Read this, and you’ll be standing straight for an ovation for a truly outstanding picture book biography. (7 and up)
Also of interest: 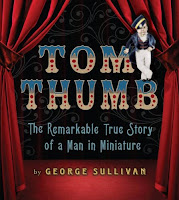 TOM THUMB: THE REMARKABLE TRUE STORY OF A MAN IN MINIATURE by George Sullivan (Clarion, 2011)
Step right up, and see the four-year-old Charles Stratton, two feet tall and fifteen pounds, same as he was as a seven-month-old baby. Master promoter P.T. Barnum didn’t miss a beat when it came to recruiting Charles for his circus, making him very rich, awfully famous, and a symbiotic partner in Barnum’s travels and adventures. While it is hard to conceive of the relationship as anything but exploitative, the author does a commendable job at the task of truly putting Stratton’s position in the historical context of the 19th century, where life was difficult and often sad, and entertainment a rare commodity; "Tom Thumb" was an early modern celebrity. Lots of text is made palpable for young readers by virtue of wide leading (space) between the lines, and the scrapbook-like interspersion of photographs and ephemera, including etchings of Sullivan’s visit to the queen, and pictures of his bride Lavinia Bump and his other circus friends. Pages of source notes underscore primary sources, and a generous bibliography is also included. Interesting reading, sure to provoke discussion, and besides being an appealing choice for reluctant readers poring over the nonfiction shelves, this is an excellent pick for book clubs looking for a true story. (8 and up)
Links are provided for informational use. Don't forget to support your local bookseller.
More Esmé stuff at www.planetesme.com.

Posted by Esme Raji Codell at 4:41 PM No comments: