QUEEN OF THE FALLS (NONFICTION)

does not churn them out, but rather, delivers a gem every few years.  In a departure from his usual fantastical fare, Van Allsburg turns his attention to a biographical story in which truth is stranger than fiction.  In 1901, Annie Edison Taylor, a 62-year-old marm at a charm school, found her financial resources depleting and without any prospects for her old age.  Fearing the poorhouse, she devises a daredevil stunt that verged on madness:  to be the first to go over the drop of Niagara Falls in a barrel of her own special design, and then reap the benefits of subsequent fame on a tour circuit.  But between nefarious managers and onlookers who are disappointed that Annie is more grandma than glamor-girl,  the bumpy trip down the mountain of water is not all Annie will have to survive.

Van Allsburg's signature nostalgic sepia or black-and-grey pencil lines are especially befitting the turn-of-the-century feel, and the startlingly detailed expressions of the people are haunting and tell another story of a thousand words, hearkening back to his prowess in POLAR EXPRESS, each pose begging the question:  what are they thinking? (Though I couldn't help wondering if a woman as modest as Annie would have appreciated Van Allsburg's uncomely depictions of her and her petticoats a-flying as she tumbled inside her barrel.) The double-paged spread of the vessel teetering at the fall's edge is genuinely suspenseful, and will literally have readers holding their breath.   In turns fascinating and exciting, this outstanding read-aloud book captures the roiling falls and all of its harrowing height, but also the poignancy of the decision of this unlikely adventurer; from the lie Annie tells about her age that nobody really believes, her understated reply of "all righty" when the barrel is about to be cut from its rope and swept into the rapids, the injustices she suffers after the fall, and the pensive interview she gives to a reporter toward the end of her life, after musing over a memory of being a child and staring at the falls: 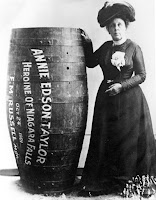 "I stood here with my father, in this very spot.  I'd never seen anything like that waterfall.  It looked like the end of the world, dreadful and beautiful, all at once.  My father took my hand and asked if I was frightened.  I told him I was, then asked if we could get closer...That's what everyone wonders when they see Niagara...How close will their courage let them get to it?  Well, sir, you can't get any closer than I got."

Be sure to share this unusual piece of history with middle elementary children and ask why Annie made the decisions she did, because with an aging population, a suffering economy and lack of public health care, this book about an event a hundred years ago is sure to inspire some timely discussion today.  It seems that growing older may be the bravest trick of all.  Author video and general info about the falls here.  (8 and up)
Also of interest:

SUNNY BOY!:  THE LIFE AND TIMES OF A TORTOISE

When you live as long as a tortoise lives, you can expect a few owners. Sunny Boy lived as the pet of several agreeable, docile domesticators: a horticulturalist, a philatelist and a scholar, but ultimately falls into the hands of a daredevil bent on taking Sunny Boy with him on a descent over Niagara Falls in a barrel. Will he ever survive to live out his days in the lap of the little girl in the museum library to whom he feels more suitably matched? Based on actual, if unfortunate events (articulated beautifully in "The Truth Behind the Tale," an author's note at the story's finale), this genial and surprising story demonstrates a love of life, even with all its unexpected twists, turns, losses and leaks. (7 and up)
Links are provided for informational use. Don't forget to support your local bookseller.
More Esmé stuff at www.planetesme.com.

Posted by Esme Raji Codell at 9:16 PM No comments: