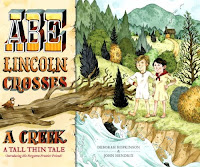 Now we're coming to the last page. About all that's left is to remind you of the moral of our story: Listen to your mother and don't go near any swollen creeks.
What?
Oh, you don't think that's really the point? A mite weak, perhaps? Like Abe, a bit thin?
Then how about this: Remember Austin Gollaher, because what we do matters, even if we don't end up in history books.

Austin was there the day young Abe Lincoln and his buddy got the wise idea to cross the swollen Knob Creek. Now, how did they get across? Did they tiptoe or did they crawl? When Abe falls in, is Austin ready to help with the words "I'll save you, 'cause I know you're on earth for a great purpose," or was he off hunting for a partridge, or did he leap right into action to rescue his friend? What's true and what's possible in history gets into a clever tug-of-war page by page, and calls for readers and listeners to grab a side and pull. Past adventures told in present tense with text that hits the pause button for reflection and invitations for the audience to cheer the heros on, this is the most rollicking slice of revision to come to life on picture book pages since the days of the log cabin. Unpretentious lines as thin and silly as a little boy's wobbling legs are still strong enough to carry us across the landcapes. According to the text, in the dark days of the Civil War, Abe said he'd rather see Austin Gollaher again than any other living man, though he never met him again after that harrowing day; it is a great [pleasure we have as readers to meet him again here. In these days of oversaturated celebrity, the differences we make in the lives of people are celebrated in earnest within these pages. This tour de force also links the connection between storytelling and history sure as a log creates a bridge across a creek, however tenuous. If children's book awards were given for titles that work best in the classroom, this baby would have won...and that's no tall tale. Children will never look at history, or their own role in it, the same way again. (7 and up)

Also of interest:
Since this is the bicentennial year of Abraham Lincoln's birth, we have an unusually comely bevy of books on the great statesman. 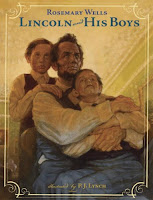 LINCOLN AND HIS BOYS by Rosemary Wells, illustrated by P.J. Lynch (Candlewick) From attending a show of acrobats, sharing "sherbet Jenny Lind," building a playfort on the roof, grieving the loss of his son to the rampant typhoid to the little boy sitting at his feet catching the pages of Lincoln's last public address in 1865 in which he still strived to show compassion for the losing side, this is the story of real people, real children, a real family, as told from the perspective of Lincoln's sons Tad and Willie. Lincoln is depicted as a loving father, and one who was well ahead of his time when it came to the convention of the day of children being "seen and not heard." Speaking of new facets of favorites, we often think of Wells as the creator of the iconic (and extremely cuddly) world of Max and Ruby and her inimitably sensitive insights into the preschool world, but she is also formidable in her forays into historical fiction, as she proved in her Civil War novel RED MOON AT SHARPSBURG. Well-researched, nicely timed narrative takes young readers back to meet famous folk who are made recognizable. (8 and up) ***We will be hosting the legendary Rosemary Wells at the PlanetEsme Bookroom and celebrating this wonderful book in the late afternoon of March 16th; save the date if you are near the north side of Chicago and would like to attend! Details coming soon. I think we'll have to have to serve up good pioneer corn bread pudding, though, don't you? Or maybe the "Mary Todd Lincoln cake" using the recipe at SweetReads, one of my new favorite blogs?*** 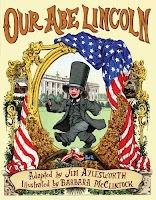 OUR ABE LINCOLN by Jim Aylesworth, illustrated by Barbara McClintock (Scholastic) Illustrated in an engraving style to resemble a children's pageant, the stage is set to sing along to the words of this ditty that was popular during Lincoln's presidential campaigns, to the tune of "The Old Gray Mare." Hooray, now even the littlest Lincoln lovers can get into the act! (4 and up)

THE LINCOLNS: A SCRAPBOOK LOOK AT ABRAHAM AND MARY by Candace Fleming (Schwartz & Wade) Too rich in text for traditional read-aloud, think of this as a jaw-dropping treasure trove of everything any child could want to know about the Lincolns. The focus on the partnership of the man and woman underscores the role of both genders in this history. Meticulous research continuously reveals the rare and amazing for page after page, and the author's enthusiasm is equally unrelenting...and contagious. Well written, fascinating and attractive, you'll plant the seed to grow a history buff with this fine fodder. (9 and up) 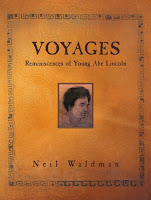 VOYAGES: REMINISCENCES OF YOUNG ABE LINCOLN by Neil Waldman (Calkins Creek) Unusually eloquent writing that relies on primary sources bring us to a new understanding of how Lincoln may have earned a personal distaste for slavery in the context of his times, through three flatboat trips along America's rivers. A strong read-aloud and starting point for discussion with middle-schoolers, this title is short but stretches the intellect. (12 and up)

The wit and wisdom of Lincoln is celebrated in hadnsome works such as Doreen Rappaport's ABE'S HONEST WORDS, illustrated by Kadir Nelson (Hyperion), and Sarah L. Thompson's WHAT LINCOLN SAID, illustrated by James Ransome (Collins), though my favorite will always be Beatrice Schenk de Regnier's now out-of-print ABRAHAM LINCOLN'S JOKE BOOK, illustrated by William Lahey Cummings, where I first encountered my favorite Lincoln quote: "God must have loved the plain people; He made so many of them." 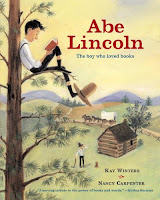 And finally, the one I most often pull out from the stacks this month:
ABE LINCOLN: THE BOY WHO LOVED BOOKS by Kay Winters, illustrated by Nancy Carpenter (Simon & Schuster) They thought he was lazy, this boy who would take a book out of his back pocket to read at the end of each row he'd plow. In fact, bigger things were in store for this young dreamer who was destined to become out 16th president. Readers are treated to a homey glimpse of this hero's boyhood, leaning on his father's lap by the fireside as yarns were spun, splitting wood, shivering with his sister in a drafty log loft. It chronicles both the dark days (like when Abe's mother dies of "milk sickness" when he is nine) and exciting adventures (such as the great wrestling match between him and Jack Armstrong, which was met with cries of "Body slam! Body slam!" by my second grade listeners). The story stops where most others begin, as Lincoln takes his seat at the White House. The unpretentious illustrations are evocative of the period and contain many details that are springboards to discussion, such as what schools were like in pioneer times, and why Lincoln campaigned from a train Best of all, we learn that Lincoln shares a trait with the reader: both booklovers! (6 and up)

And use Abraham Lincoln's "penny power" to create a fun fundraiser that students won't soon forget! Yes, it even works in a recession! Lucky us! Oh, that dear stovepipe-hat wearing hero is still doing us good. Thank you, Abie-baby!
Links are provided for informational use. Don't forget to support your local bookseller.
More Esmé stuff at www.planetesme.com.

Thank you! I had a very long week in my day job, and so it was really so nice to read your kind appreciation of ABE LINCOLN CROSSES A CREEK. -- Deborah Hopkinson