"Private Finch," I say, turning back to tug at his stiff woolen sleeve. "If you happen to come across Harold Figg of Pine Swamp, Maine, would you please tell him to get on home? His little brother Homer, is dying. Will you tell him that?"
"If I meet him, certainly," says Private Finch. "But it is a big war. How will I know him?"
"Looks a lot like you, except Harold is slightly taller and stronger and better looking."
"Is that a fact?" says Private Finch with a toothy grin. "I'll see what I can do, Homer. You are Homer Figg, right?"
I shrug. "Maybe I am."
"I must say, my young friend, that you look remarkably healthy for a boy who is dying."
"Never mind that. Will you tell him?"
"Of course."
After glancing around and grinning to himself, he snaps me a fine salute. "Thank you, Homer Figg. I am reminded to write a letter to my own dear little brother, who is slightly taller and stronger and better looking than you, and who would no doubt fake his own death to have me safe at home."

Homer Figg is a world-class fibber, but when his evil uncle shanghais his brother into the Union army for a price and he must go and rescue him, his real adventures become as wild as the lies he tells. From helping a Quaker abolitionist avoid closing down his station on the Underground Railroad to playing the part of a "pig boy" in a traveling medicine show to escaping charges of treason in a hot air balloon to waving a flag on the front lines of the Battle of Gettysburg, when this title promised adventure, that was the biggest lick of truth in the book. Homer's only fidelity is familial, and he changes sides more often than an old phonograph record, but all is fair in war when it comes to keeping his fine, brave brother in the land of the living. What might have been a predictable ending takes a surprising twist,

and the steady character development and real honest-to-goodness caring and affection between the brothers builds to a surprisingly emotional crescendo. I know many a teacher who will be thrilled to have a funny, page-turning narrative from this time period to share, as the read-aloud rations on that end were getting mighty thin. Pair with Margaret McMullan's very powerful drama HOW I FOUND THE STRONG (Houghton Mifflin) that also focuses on war's effect on a family, as well as some of the great non-fiction recommended below to create literature circles that will have your reading troops falling into line, not to mention a whole new generation of history buffs. (10 and up)
Also of interest:
By the time I had finished high school, most of what I knew about the Civil War had come from Stephen Crane's Red Badge of Courage and Mark Twain's Adventures of Huckleberry Finn, both brilliant and moving, but these days intermediate readers can enjoy a wealth of age-appropriate non-fiction that brings history alive with the immediacy of a bugle's call and a horse's charge! 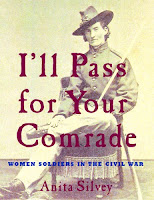 I'LL PASS FOR YOUR COMRADE: WOMEN SOLDIERS IN THE CIVIL WAR by Anita Silvey (Clarion)
Celebrated children's literature critic and aficionado has made a direct contribution to the juvenile shelves with this meticulously researched and well-organized account of women who fought on the front, sometimes in disguise, sometimes to accompany beloved family members and sometimes to simply experience life to the fullest: "I...was more than repaid for all that I had undergone...in being not only a spectator, but an actor, in such a sublime, living drama." Extraordinary stories, such as the woman who lived under the guise of being a man for decades after the war only to have her ruse discovered in death and still was given full military burial, are fresh and riveting, and speak to the complicated matter of equal participation in the world, through both the good and the bad. A valuable addition and perspective. (10 and up) 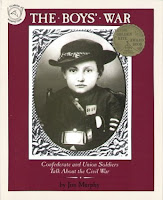 THE BOY'S WAR: CONFEDERATE AND UNION SOLDIERS TALK ABOUT THE CIVIL WAR by Jim Murphy (Clarion)
Brilliantly reliant on primary sources and photographs, this journalistic endeavor brings the ghosts of this war back to walk among us and tell their tales from a perspective closest to the young reader's own. It's not often I see boys fighting over a history book, let alone crying as they read, or turning pages until the minutes are lost, but that's the power of this time machine in a book. (10 and up) 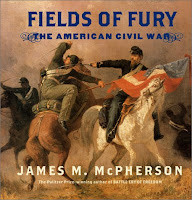 Other compelling POV's not always explored in textbooks are found in the brutal but eye-opening account of Louisa May Alcott's days as a civil war nurse in HOSPITAL SKETCHES (12 and up), the excellent, comprehensive and concise pictorial overview of Civil War campaigns and battles in James McPherson's FIELDS OF FURY (Atheneum) (11 and up), and James L. Swanson's CHASING LINCOLN'S KILLER (Scholastic), the children's version of the best-seller by grown-ups about the pursuit and capture of John Wilkes Booth which gives THE BOY'S WAR a run for its money with the reluctant readers. (12 and up)
Links are provided for informational use. Don't forget to support your local bookseller.
More Esmé stuff at www.planetesme.com.

I loved I'll Pass for Your Comrade-- I kept quoting bits of it to my family. And thanks for mentioning The Best Loved Doll-- hadn't thought of that one in years!