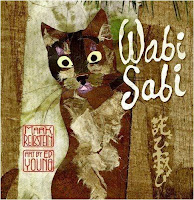 Wabi Sabi is a way of seeing the world that is at the heart of Japanese culture. It finds beauty and harmony in what is simple, imperfect, natural, mdest and mysterious. It can be a little dark, but it is also warm and comfortable.It may best be understood as a feeling, rather than an idea.
A little cat in Kyoto who sets out on a journey across the Japanese landscape to discover the true meaning of his enigmatic name. Collage and torn-paper masterpieces are composed vertically, so the reader turns pages from bottom to top instead of left to right. A similar idea of the beauty of imperfection was explored in Linda Sue Park's Newbery-winning novel about the lifework of a Korean potter, A SINGLE SHARD, but gets new treatment here in picture book form. The adventure is accented with haiku that the reader experiences like stepping stones along a garden path, and the art, from the temple rising out of the crowns of auburn maples, a cat's reversed reflection in a shining bowl or the ripple of the smallest yellow frog slipping beneath the water's surface, well, those read like haiku, too. This book already has legend behind it, with the Caldecott award-winning illustrator misplacing the original artwork and vowing to re-do it all, and to do it even better. It's hard to experience this ambitious project without imagining the spirits of Issa and Basho nodding their approval. An abstruse concept is well-grounded in the framework of this offering that has a cultural, literary and visual richness that will be realized fully by young readers with the guidance of an appreciative, bookloving adult. Children will be inspired to seek the wabi sabi all around them. (8 and up)
Also of interest:

THE CAT WHO WENT TO HEAVEN by Elizabeth Coatsworth, illustrated by Raoul Vitale (Aladdin) A pariah cat finds a place in the heart, home and painting of a Buddhist artist. Reading a bit like a Siddhartha for kids, this vintage Newbery award winner is light on pages but heavy on ideas of forgiveness and acceptance, and is sure to enlighten many readers on aspects of Asian culture. I was always a little confused as a child who had a healthy dose of Zen why the cat would end up in something akin to a Christian heaven instead of being a little heavier on the Nirvana and reincarnation front, but, hey, the book was written in 1930, and was a multicultural stretch for its time. Theological nitpicking of my youth aside, this oldie but goodie continues to find a perennial audience of all faiths because the language is challenging and transcendent, and it is the unusual sort of story that can reverberate for lifetime if, like WABI SABI, it is read aloud by a supportive adult. (11 and up) 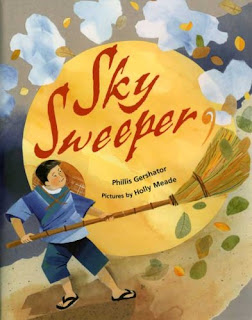 SKY SWEEPER by Phyllis Gershator, illustrated by Holly Meade (Farrar Straus & Giroux) The monks need a temple, the temple needs a garden, and the garden needs a flower keeper...Takeboki! As one season follows another, though, members of the Japanese community question why Takeboki's ambitions do not stretch far beyond the garden gates. In the end, Takeboki's dedication and singleness of purpose inspires all. In these days of unnecessary competition, this story of a boy who is content to do one simple job well is very refreshing, and this book will also awaken an understanding in children to give thought to workers who do the tasks that may seem mundane, but are necessary and deserve appreciation. (6 and up) 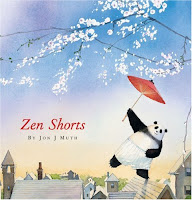 ZEN SHORTS by John Muth (Scholastic) One day, a generously-sized panda named Stillwater speaking in a "slight Panda accent" shows up at the door of three children, befriending them and sharing with them stories passed along to him from his "Uncle Ry." In fact, the Panda is sharing with them three zen koans, which are simple fables or parables that have been rooted in Chinese and Japanese culture for centuries. Like a mellow, behemoth Cat in the Hat, children will hope that someday they will open their door to such a guest. The retellings are illustrated using a sort of opposite Wizard of Oz technique: when he shares a tale, they become a sketchy brush-painted blue, black and white, and when it is the children's everyday life, we return to realistic full-spectrum watercolors. "Uncle Ry" is inspired by the poet Ryokan Taigu, one of Japan's most popular poets, and the Panda is named for the great teacher Sengai Gibbon. The stories are a bit watered down from their original sources (children eight and up will be able to enjoy a broader array in their more original forms in ZEN FLESH, ZEN BONES, a title that by my standards is as necessary to a child's upbringing as Aesop's Fables!), but this book definitely serves as a valuable introduction for the youngest reflective reader. (5 and up)
Links are provided for informational use. Don't forget to support your local bookseller.
More Esmé stuff at www.planetesme.com.