NONFICTION
THE BOOK OF TOTALLY IRRESPONSIBLE SCIENCE by Sean Connolly (Workman)
Perform first aid on a carrot. See the real iron in a bowl of cereal. Step up your slime by giving it an electrical charge. Make a hovercraft out of an old CD. Stand inside a soap bubble. Hold a Viking funeral. Put a marshmallow on steroids. Cook up a batch of homemade lightning, or make a hot-air balloon out of a teabag, or build your own bottomless pit. Totally science? Oh, yes. Irresponsible? Maybe not, thanks to clear directions and helpful "Take Care" hints noted at the bottom of every experiment, as well as helpful "time factors" to consider (between two minutes to more than a day) and "scientific excuses," also known as explanation. Most of the experiments would probably be better served with a little help from an eagle-eyed adult (I don't think I'd let a kid cook the bacon for a Bacon Smokescreen), but this should be no problemo for a classroom teacher trying to engage a roomful of future scientists. It includes my all-time favorite experiment, "Egg in a Bottle," but generally goes waaAAAaaay beyond the "static balloon" and "floating pin on water" grade-school standbys (even the "Backyard Vesuvius" takes the exploding volcano to a new level). These wacked-out experiments put the mad in science and put to rest the "b" word, "bored." Wouldn't it be nice to never hear that one again? (9 and up, with adult supervision)
Also of interest: 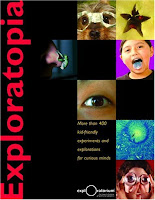 EXPLORATOPIA by The Exploratorium (Little, Brown) Perhaps some of you have been fortunate enough to visit the Exploratorium in San Francisco, the "museum of science, art and human perception," and a mecca of learning and understanding. It's hard to visit that space with all of its hands-on fun and clear explanations and not want to bring it into every classroom in the country. This book can help you try! Just like the museum, you come away with the "why" as much as the "wow." Rich with background information, eye-popping photos are accentuated with colorful drawings to clarify steps and concepts even more fully. Worthy of a whole curriculum and a boon to homeschoolers, this is also a great book for shared science exploration as a family (hey, maybe replace "board game night" once in a while). (9 and up) 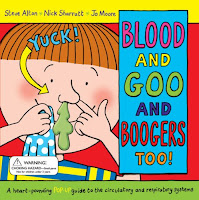 BLOOD AND GOO AND BOOGERS TOO! by Steve Alton, Nick Sharratt and Jo Moore (Dial) Subtitled "A heart-pounding pop-up guide to the circulatory and respiratory systems," this book gets off on the gross-out from the outset with some plastic lipid nasal discharge on the cover, and keeps readers gently gagging throughout with the photographic "guess the gross close up" feature throughout (cilia, damaged lung tissue, weakened bacterium). Booger gwee notwithstanding, the exposition on the human body has a steady flow, 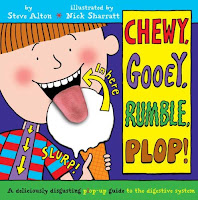 using appropriate scientific vocabulary without being overwhelming for the intended audience, and the illustrations throughout are brightly colored, cheerful and funny. When I showed a second grade teacher this book, I guess she was used to nasal discharge because she wasn't the least bit thrown. Instead, she used her respiratory system to breathe deeply and sigh, "Wow, this would have been perfect for teaching my unit on the human body." Once you find this has made your science-lover's heart beat faster, you can continue to satifsy their appetite for learning with CHEWY, GOOEY, RUMBLE, PLOP, the companion guide to the digestive system. (7 and up)

Speaking of science over-the-top, I'm hoping everyone is familiar with the Frannie K. Stein series. Sugar and spice and all things nice she's not, but Bunsen burners are a-popping to celebrate the arrival of this nonconformist who may well provide the female counterpart to Dav Pilkey's CAPTAIN UNDERPANTS. While Franny's mother might have hoped for one of the Ashley twins, she's got more of a Wednesday Addams on her hands, re-doing her bedroom's frou-frou decor to resemble a laboratory. As we meet her in the first installment, LUNCH WALKS AMONG US, Franny likes science a lot, but she likes making friends even more, and is troubled by the reticence of her peers to gather 'round. When her concerned teacher suggests Franny think of making friends as an experiment, she's talking Franny's language. After collecting the necessary data, Franny undergoes a dramatic transformation (brought to life courtesy of some mix-and-match pages in the book that will make your children laugh out loud), and finds the popularity she's been craving. But when her teacher is abducted by The Giant Monsterous Fiend, she makes a difficult decision and returns to her more craven self in order to create the lunch meat monster that can perform the rescue. While Benton may be accused of a certain amount of copy-catting and potty humor, there is definitely a method to the madness. The story has real conflict that both boys and girls will recognize, low-level vocabulary and page-turning suspense to ensure success for reluctant or emergent readers, and the cartoon illustrations are cool enough to compete with Saturday morning television. I hypothesize that this little girl who uses a snake to skip rope, builds a Barbie clone that can chomp the heads off of other dolls and has a green thumb for Venus flytraps has the potential to ooze her way into the hearts of many. (7 and up)
Links are provided for informational use. Don't forget to support your local bookseller.
More Esmé stuff at www.planetesme.com.

Posted by Esme Raji Codell at 2:05 AM

TOTALLY IRRESPONSIBLE SCIENCE?? I have to have this book! RIGHT NOW!!! Thanks for the review!

I will have to check that science book out. It sounds to good to miss. I love chewy gooey...., didn't realise there was another one. Fab!

Good books for children who are interest in science.

Thanks for this,its very great and wonderfull