AROUND THE WORLD WITH MOUK (PICTURE BOOK) 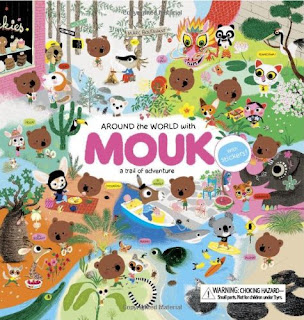 PICTURE BOOK
AROUND THE WORLD WITH MOUK by Marc Boutavant (Chronicle)
Take your eye for a walk! And what a walk it is, from continent to continent accompanied by a restless little brown bear who bids au revoir but not adieu to his friends in a French café while he goes off to collect some more comrades. Mix the Asian-influenced, almost unnerving cuteness of Gyo Fujikawa with the eager, overpopulated animal world of Richard Scarry in a new wave trip-hop blender, and wah-la! The result is a book to look at repeatedly, and with wonder. The animals that inhabit these pages are not trite children's book cuties, but a diverse and fully realized world of hipster galagos, aardvarks, bandicoots, tanukis, ocelots, caimans, lemurs, pangolins, wombats, salamanders, skinks and fruit bats...someone did his homework at of the zoo, that's for true. 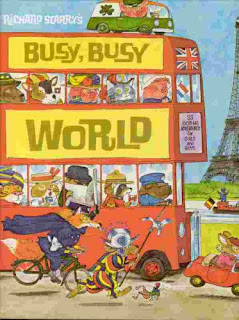 Each glossy spread holds more interest on two pages than the average picture book does in thirty-two, and it even comes with bonus Colorform-like resuable vinyl "stickers" that can be added to the action; not necessary to the success of this book, but nonetheless fabulous and begs the question, "did they think of everything?!" There is contagious delight and personality in these pages, 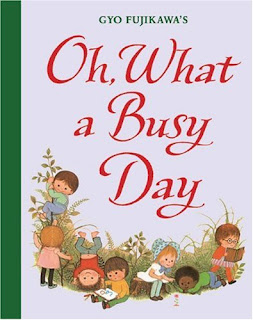 we feel the energy of an artist (and supportive publisher) who really loved making a book and wanted to tuck everything wonderful inside.

Sure, some details in the illustration were unsettling: an insidious smiling tsetse fly, a chicken eating a fried egg, octopi as charming pink characters on one part of a page hang out on a line to dry for lunch on another part, and some general food chain drama ("don't eat me!" exclaims a bunny-like mammal to a python. "I have an appointment!"). Oddly, the effect is not unlike real travel, requiring a certain suspension of judgment in the course of discovery of things unfamiliar and beautiful in turn, sometimes in plain view and sometimes in the corner of the eye. While an index would have been useful for identifying the mass menagerie, many animals are still named in context, and one finds one's self learning new things, though not always what we expect...also like real travel. The book ends organically with a return home and Mouk recounting his adventures to his homebody buddies, one who is inspired to pack his bags, the other who will stick to the internet. Like looking at a photo after a trip, Mouk's attempts at summary can't capture the true color of his magical days, and the reader can sense Mouk's frustration in trying to share it all. The inside joke is that he was never alone; the reader was there every step of the way, and remembers the excitement, too. Mouk, where you lead I will follow, and so will many goggle-eyed kids. (6 and up) 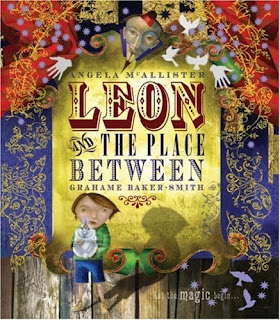 LEON AND THE PLACE BETWEEN by Grahame Baker Smith (Templar Books) "It will be magic. You have to believe," advises Leon as the siblings await the parting of a curtain and the beginning of a magic show. This book feels more like a theatrical experience than a reading experience; more specifically, the chance to walk around in someone else's dream. While digital illustration often can feel chilly and flat, what these digital montages have accomplished with light is astonishing. Pages at times actually seem backlit and glowing, highly textured and dimensional; the shadows are so sharp, the black so deep with stars glowing, it's as much like looking into a window as on to a page. With the appearance of the "Abdul Kazam," Leon is carried away though a die-cut door into an alternate universe, and given a tour by the magician's son, only to return to the real world with a deeper conviction that anything is possible...a belief that the young reader is bound to share after this experience. The nod to Aladdin-like exoticism is wearied, and the free-flow of imagination and decorative fonts may be a rough carpet ride for those who prefer a more staid storytelling style, but the theme of a boy trying to walk the line between what's real and what isn't is developmentally appropriate and handled with both delicacy and optimism. Most of all, it cannot be denied that the glimmering, intense beauty of this book is some amazing trick. (7 and up) 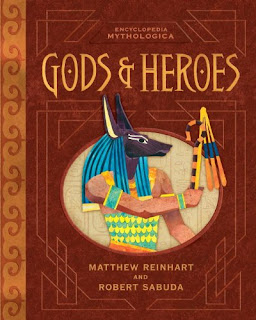 ENCYCLOPEDIA MYTHOLOGIA: GODS AND HEROES POP-UP by Matthew Reinhart and Robert Sabuda (Candlewick) By Zeus, they've done it again, or should I say outdone it? This latest pop-up encyclopedia in the series (see FAIRIES in the "mythologica" collection and the less whimsical SHARKS, DINOSAURS and MEGABEASTS in the "prehistorica" series) is the most awe-inspiring. We are welcomed on the first page by a sprawling vision of Hathor, the ancient canine-faced Egyptian protector of expectant mothers. On another page, mighty Viking deity Thor swings his enchanted hammer off the page, and for a finale, the 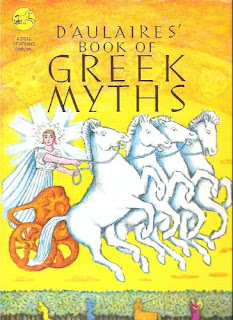 Aztec plumed serpent Quetzalcoatl slithers with springing action. The sublimest surprises in the book , though, are the unsuspecting insets; see the light come into the eyes of Sun-Wukong, the legendary Chinese Monkey-King, and the twelve labors of Hercules revealing themselves in succession with the pull of a tab by some absolutely genius paper mechanism, well, that just plain runs the arrow right off of the oo-ahh-o-meter, a wholly fresh effect that to my mind is worth the price of the entire book. Pair with the masterful classic must-have, D'AULAIRES' BOOK OF GREEK MYTHS (seriously, high school teachers, please share these with your classes as well...big kids like pictures, too). (8 and up)
Links are provided for informational use. Don't forget to support your local bookseller.
More Esmé stuff at www.planetesme.com.

I think I checked out D'Aulaires' Book of Greek Myths from the school library about a hundred times when I was in middle school.

holy cow! even though my son's birthday just passed, I see a couple more new books in his future. Anubis & co. in a new Sabuda/Reinhart creation? And a revamped Richard Scarry-esque title? Thanks for the heads up on these books, Esme!