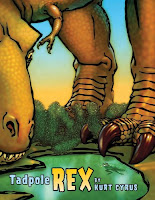 PICTURE BOOK/NONFICTION
TADPOLE REX by Kurt Cyrus (Harcourt)
Like any little toddler, this tadpole dreams of the day he will become a big boy, but his idea of a big boy happens to be Jurassic-sized, emulating the dinosaurs that roam his world. Though Rex never quite passes his weeny welterweight status, he still undergoes changes that allow him to hold his own. 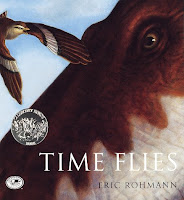 Perspective and scale are the order of the day in this stunning science and storytelling mix that employs a new height of effective digital illustration enhancement. The suspenseful tale is told in verse both perfectly paced and meticulously metered, overall one of the best read-alouds of the past year. A note from the author about metamorphosis, prehistoric frogs, and the environmental challenges frogs face today is included. Fans of the Eric Rohmann's award-winning visual drama TIME FLIES will enjoy this newest dinosaur delight. (5 and up)
Also of interest:
One good dino-book deserves another. 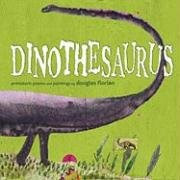 DINOTHESAURUS by Douglas Florian (Atheneum)
Gigantic, titanic, enormous, colossal--
What once was humongous is now just a fossil.

The celebrated poet often inspired by the natural world and its creatures turns a reptilian eye toward the primeval timeline. Superstars like the Stegosaurus and Brachiosaurus and Triceratops (Beware and please-take-care-a-tops/Born with three great horns in place,/Triceratops was in your face) all get their due, as well as newer-bies like the Barosaurus (higher than five elephants, "hey kid, wanna ride?") and the Micropachycephalosaurus (yes, there is pronunciation help for each dinosaur, as well as a "glossarysaurus" on the tail end). Quirky mixed-media collage illustrations have a fun, child-like naivite. What I love about this author is that while working a theme from cover to cover, the poems are never stale, never belabored, forced or repetitious; inspiration follows from tip to tail, which in the case of the likes of a Seismosaurus is quite a long way indeed. (5 and up)
Links are provided for informational use. Don't forget to support your local bookseller.
More Esmé stuff at www.planetesme.com.

time flies is one of my favorite! must dig it out of the heep....