NONFICTION
REDWOODS by Jason Chin (Roaring Brook)
In this effective melding of picture book format and nonfiction content, a redwood forest sprouts from a book that a boy finds in a subway station. A Thanks to a fertile imagination, the facts carry him off into the world of the tallest living things on the planet, rising over three hundred feet in the air. Through the perils of a forest fire, encounters with things that creep and leap and soar (follow the little flying squirrel from page to page!) and a majestic climb into the crown of the Titan tree, the boy comes to appreciate the survival of this giant and its role in nature...just in time for another reader to find the book on the park bench. Underscored by vertically oriented book design and elegant watercolors, the visual juxtaposition of the natural world against the boy's own urban dwelling (seeing a redwood tower six stories taller than the Statue of Liberty, for instance) will inspire an interest and appreciation in readers far removed from the sensory delights of the real forest. The book's fanciful dimension is never overpowering, keeping its roots in factual information, and an afterword about "redwoods in danger" and an inspiring note from the author will have children dreaming of a real visit long after the book visit has ended. Redwoods are also often known as a sequoia trees, so you may want to pair this title with James Rumford's biography of the tree's equally majestic human namesake: SEQUOYAH: THE CHEROKEE MAN WHO GAVE HIS PEOPLE WRITING. (7 and up)

Also of interest:
Here's a couple new nature-loving books to help prepare children for their century! 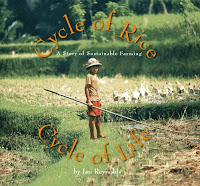 CYCLE OF RICE, CYCLE OF LIFE: A STORY OF SUSTAINABLE FARMING by Jan Reynolds (Lee & Low)

A sustainable world "meets the needs of the present, without compromising the ability of future generations to meet their own needs." - "Our Common Future," World Commission on Environment and Development

How did the country of Bali go from being the best rice producer in Indonesia to the worst? This title documents the country's unique temple-based system of water irrigation, linked "like beads on a necklace," and the associated rituals of gathering, sharing and ecological balance that made it work for over a thousand years. In a terrible attempt to fix what wasn't broken, a government-imposed "Green Revolution" took the farmers down a slippery slope with genetically engineered crops and environmentally dangerous pesticides, interrupting not only the routine of nature but communities as well, and inciting an uphill but partially successful battle by scientists to preserve both nature and culture. By following the affects of the agricultural decisions of a boy and girl in a village, the story becomes more pertinent to young readers . Straightforwardly told and with pockets of tension, the story is accented with largely idyllic Balinese scenes in a photojournalistic style reminscent of George Ancona. The vocabulary is challenging and specific to the topic, but words like subak, aerate, Jero Gde and weir are neatly defined in the glossary and pronunciation guide in the back. This book is wonderful literature tie-in for learning about the water cycle, and affords a chance to gain a greater sense of connection and gratitude about where both our food and our water come from. Don't forget to follow up by playing the "Free Rice Game," in which the UN donates a ten grains of rice to help end hunger for every correct quiz answer! (8 and up) 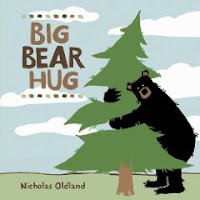 BIG BEAR HUG by Nicholas Oldland (Kids Can Press)
Talk about a tree-hugger! This bear loves to embrace every living thing he comes in contact with (look at that poor, surprised, bug-eyed beaver in the bruin's clutches!), but when the bear meets an axe-wielding tree-cutter, the claws come out. Trying to stay true to his nature, can bear think of another way to solve the problem? Plain, cheerful matte paintings with a muddy palette seem very au naturel and befit this simple but powerful tale. With the same conservationist theme as Paul Geraghty's shamefully out-of-print rainforest read-aloud STOP THAT NOISE!, this laugh-out-loud story goes to show that love will always find a way...and that's a message that always bears repeating. (4 and up)
Links are provided for informational use. Don't forget to support your local bookseller.
More Esmé stuff at www.planetesme.com.

Posted by Esme Raji Codell at 9:48 AM

Sounds perfect for my prek-8 public montessori school in Western Ma, Esme. Thanks for making me aware.
t