WINK: THE NINJA WHO WANTED TO BE NOTICED (PICTURE BOOK) 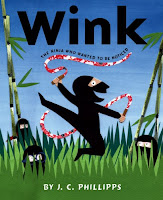 PICTURE BOOK
WINK: THE NINJA WHO WANTED TO BE NOTICED by J.C. Phillipps (Viking)
"The blossom that flaunts his color is soon plucked!" warns Master Zutsu, teacher at the Summer Moon School for Young Ninjas. "The loudest cricket is the first to be caught!" But Wink can't help it. What's the use of being super stealthy if no one sees? Wink has a propensity for performance, but when Wink resorts to acrobatics and engages a panda in battle to catch everyone's eye, things look bad for Wink's future prospects. A surprising and happy ending sneaks up by the last page to remind us that there is a path for everyone, even if it's not the path we expect, grasshopper! Gracefully cut, clean collage illustrations very judiciously employ fetching swatches of origami paper. The pictures are as sharp as nunchucks, humorous and expressive to boot; Wink's flamboyant improvement on the basic black ninja gear is a scream, and Wink's smile on the last page is one that will be mirrored in every face in the storytime circle. This picture book verges on perfect; funny and original, touching and hopeful, it's a story that every child will absolutely love. This is one ninja that definitely will be noticed. (4 and up)
Also of interest:
Everybody loves kung fu fighting (and karate...and tae kwon do)!

BLUE FINGERS: A NINJA'S TALE by Cheryl Aylward Whitesel (Clarion)
Twins are considered bad enough luck in 16th century Japan, but when Koji's clumsiness loses him a valuable artisan apprenticeship, he becomes a pariah, fleeing to the forest. He is captured by a band of ninjas, deft and focused warriors whose fighting skills cannot be matched. The training and missions of Koji, and the dawning of his destiny will keep readers absolutely riveted. Koji's growing understanding of his role in the feudal society, strong personal relationships and his desire to keep a code of honor will go far to help children understand that the Teenage Mutant Turtles didn't have anything on the real McCoy! In spite of the dangers and action, the violence in is at a minimum, but the page-turning stays at a maximum. This book earns a black belt for excellence. (10 and up)

MORIBOTO: GUARDIAN OF THE SPIRIT by Nahoko Uehashi (Scholastic) A prince is thrown from a bridge into raging waters. Enter Balsa, a female bodyguard for hire, who rescues him purely out of habit, and then is charged with his protection. Fans of anime will love the action of this story played out against a well-developed fantasy world, and fans of literature will love the equally well-developed characters, and the bravery with which the text speaks to the meaning of power. A hot cutting-edge import and must-have addition to any middle school collection. Haven't enjoyed such good estrogen-fueled martial arts since Crouching Tiger, Hidden Dragon. (12 and up) 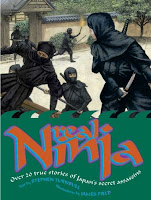 REAL NINJA: OVER 20 TRUE STORIES OF JAPAN'S SECRET ASSASSINS by Stephen Turnbull, illustrated by James Field (Enchanted Lion) Not for the faint of heart, we have an illustrated history of the undercover elite force of assassin known as "ninja," "a word that literally means 'invisible men.'" Unromanticized tales of kidnapping, suicide, arson and assassination are balanced by impressive legends of intrigue, quick thinking, disguise and escape, and descriptions of a macabre but resourceful inventiveness that would have made James Bond proud. The ninja house, ninja weapons and fascinating ninja mythology all get bows of respect here, and exclamation points rightfully abound. A hyper-realistic, detailed painting style brings to mind martial arts movies of the 1970's, and likewise, this book pulls no punches; the red paint comes out on the blades, so a certain fortitude (and non-censoring Shogun library overlord) is required to get from cover to cover. That said, if you are sharing nonfiction books about pirates, the ruthless gangstas of the high seas, in fairness can you have any qualms about a ninja here and there? Readers interested in real military history will find this wild book a little scary, and lot fascinating...I've already seen a few boys practically "hi-YAH!" each other in order to get the next turn at it. (9 and up)

Thanks a bunch Esme. That was a fun and flattering review. I'm so glad you liked the book!

This makes me happy (for obvious reasons).

Oh, thank you for putting this together! I have a kid in my library who is suddenly OBSESSED with ninjas, and I was running out of good ideas. This will come in very handy.

What is it about ninjas? My family recently watched home movies of the Christmas when my oldest was 3 and received a full ninja costume. He wore it with cowboy boots while he played his toy electric guitar. He too was a ninja who wanted to be noticed!

Excellent reviews! These look great and I'll be putting them on my to-read list. Thanks for the recommendations!

Those look awesome--so much fun.