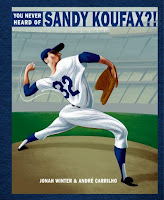 Have you ever heard of baseball’s greatest lefthanded pitcher, the man who played for the Brooklyn Dodgers, who made the mighty Mickey Mantle cry, “what the heck was that?” and made home run king Willie Stargell comment that trying to hit a Koufax fastball was like trying to drink coffee with a fork? Well, Koufax wasn't always touted as one at the top of his game. He started out as an unpredictable, inconsistent player who kept to himself. This book also talks about the terrible anti-Semitism he suffered as one of the only Jewish players in baseball in his time, but how Koufax stayed true to himself and his faith, setting an example for youth and showing his Jewish pride; he missed the first game of the 1965 World Series because it fell on a high holy day when observant Jewish people aren’t supposed to work. Illustrations in a limited palette and tastefully gilded in bronze employ lines that are slick and sleek and long and genuinely stunning, with all the exciting tension of a rubber band being pulled to it's full tautness, almost humming with its own potential energy. This book underscores how rookies have to work to get to the top of their game. Both beautifully written and illustrated and with a fabulous, stop-in-your-tracks lenticular cover that allows Koufax to follow through on his pitch, this is a resonant work about persistence and comebacks that will be well appreciated by kids of any background who need to try, try again. 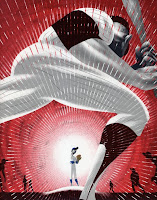 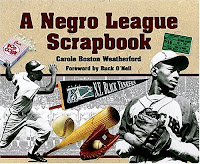 Also of interest:
A NEGRO LEAGUE SCRAPBOOK by Carole Boston Weatherford (Boyds Mills Press) Stunning archival photos are the highlight of this handsome, straightforward collection celebrating these amazing ball clubs who shone during the shameful period of segregation. Rhyming couplets serve as starters, introducing stats, superstars and insights into the timbre of the times. If you enjoyed Kadir Nelson's recent award-winning masterwork WE ARE THE SHIP: THE STORY OF NEGRO LEAGUE BASEBALL, this offering should not be overlooked as a necessary companion for readers who want to go extra innings on the topic. 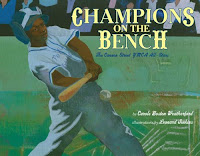 Also by the same author is CHAMPIONS ON THE BENCH: THE CANON STREET YMCA ALL-STARS illustrated by Leonard Jenkins (Dial), the unfortunately true story of a team that would not be engaged in play in the state championship because of their race. Told through the point of view of a little boy in the lineup who dreams of playing baseball like his heroes Willie Mays and Hank Aaron but doesn't even get his turn on the sandlot, the heartbreak is palpable, but so is the hope...a hope that might be easy to take for granted in hindsight, but ask the children to imagine how hard it must have been to be so brave not knowing for sure the direction in which history would turn, or spending an entire childhood in which that turn never came? Carole Boston Weatherford's treatments are a standout. She writes sensitively, but with a powerful swing; with both heart and hammer, her books are always a pleasure and an awakening. She does the brave and important work of keeping a piece of the past in the immediate present. Pair with 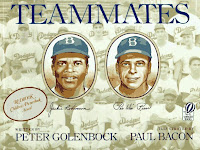 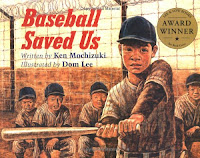 TEAMMATES by Peter Golenbock, illustrated by Paul Bacon and BASEBALL SAVED US by Ken Mochizuki, illustrated by Dom Lee to put into perspective how the game correlates with the timeline of American history, and also to encourage children to be upstanders instead of bystanders, whatever time period they are living in. (7 and up)

SWING! by Rufus Butler Seder (Workman)
This gimmicky little gem sticks to the dream theme. Minimal text is accentuated with pictures that depict children riding bikes, running relays, swimming laps and of course giving their all with the ball. Using the funky-fresh and eye-popping Scanimotion technique last seen in the New York Times bestseller GALLOP (and also akin to the "Magic Moving Picture Books" published in the 1970's by Dover Books), objects actually are animated with every turn in of the page in an effect that needs to be seen to be believed. Sports fans young and old will eat it up like hot dogs and peanuts. (3 and up)

More books to take you out to the ballgame here.
On a personal note: busy with books! 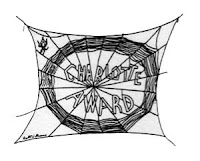 Big thanks to my blog visitors for patience between posts; it's been a very busy spring! I had a wonderful time sharing the best reads with booklovers at the New York State Reading Association, where I learned about their cool and very child-friendly "Charlotte Award" (named for the spider, of course!), and also had the pleasure of hearing a moving keynote by educator, musician and great speaker Jerry Mills; I highly recommend that every teacher in America download his song "What You See" on iTunes lest we ever forget why we are in the classroom (warning: have tissue handy, I don't think there was a dry eye in the house).

I was also busy preparing to be the kick-off speaker for Chicago's Big Read, a really exciting and positive initiative supported by the National Endowment for the Arts that strives to build a national community of readers. In preparation, I read the NEA's report, "Reading on the Rise," and while I don't usually find agency reports to be page-turners I have to confess this was the exception to the rule! I encourage everyone to read it, hard as it is to come by good news these days! The report suggests, "For the first time in over a quarter-century, our survey shows that literary reading [novels, poetry, shorts stories, plays in print or on-line] has risen among adult Americans. After decades of declining trends, there has been a decisive and unambiguous increase among virtually every group measured in this comprehensive national survey...Best of all, the most significant growth has been among young adults, the group that had shown the largest declines in earlier surveys. The youngest group (ages 18-24) has undergone a particularly inspiring transformation from a 20 percent decline in 2002 to a 21 percent increase in 2008."

The focus of Chicago's Big Read was on Ray Bradbury's classic, FAHRENHEIT 451. Named for the temperature at which paper ignites, it is a visionary dystopian novel about a fireman whose job it is to burn books until he realizes how important and transformational they are. I was invited to speak about this book, intellectual freedom and the power and importance of reading starting from an early age, creating a context for a "reading life story." The well-organized event was held at Columbia College. I have to confess, even though I am not consistently much of an academic type, wooooo, I think I fell a little bit in love with Columbia, all of the cool, thoughtful students and the brilliant professors, both the sort that I believe really make a difference in the world. Speaking of, I had so much fun at the kickoff I decided to attend another Big Read event, a lecture by Ray

Bradbury's biographer and Columbia professor Sam Weller who gave a presentation so engaging that I simply didn't want it to end (which is saying a lot, especially considering that there was brie cheese and chocolate cake at the reception afterward). Mr. Weller spoke very respectfully and lovingly of Bradbury and you could tell he was his biggest fan, and he also spoke of how powerful Bradbury books were especially for teenage boys crossing over from children’s literature into adult literature, which sounded true and seems all the more true as I have been reading THE ILLUSTRATED MAN (though for me as a teenage girl and a lover of realistic fiction, Betty Smith, Maxine Hong Kingston and Grace Paley filled the bill...oh well, the more the merrier). Weller also spoke of how Bradbury loved his Carnegie library growing up (do you have one near you? Visit this website that will inspire you to take road trips to visit all of them...what national treasures!) and by the end of the evening it was clear that Ray Bradbury was a great lover of life in general. As a present to yourself, please participate in The Big Read programming in your community for a surprising and joyful jump-start in your own reading, oh please oh please watch the long version of the video about Ray Bradbury, and rediscover why books and reading are so very important...and so beautiful. "Stand at the top of a cliff, jump off, and build your wings on the way down." "Imagination should be the center of your life." "Go into the library and discover yourself." Sigh.

This weekend I had the distinct pleasure and honor of reading the final round of questions at Chicago's Battle of the Books, the battle royale of elementary school bookworms that culminates in coveted medallions and trophies. (A nice description, albeit from last year, at Reading Mama.) Congrats to all the winners and participants for a great game! I also got to tell riddles to over a thousand kids, a class clown's chance of a lifetime.

Why did the librarian slip and fall on the library floor?
Because she was in the non-friction section.

Why didn't the burglar break into the library?
Because he was afraid he'd get a long sentence.

What's round and brown and lives in the forest?
Winnie the Poop.

The poop joke got a bigger laugh from the 8th graders than the 4th graders. Who knew? And who knew how many librarians it takes to screw in a light bulb? Or how hard it is to find reading riddles? (Thanks, Multnomah County Library and AlphaMom.)

One of my favorite quotes in the world is from a letter published in Sun Magazine, "live the life for which books have prepared you." Hey, I am trying! Again, thanks for your patience and support, and I hope books are preparing you and yours as well for many fine adventures.
Other news:

Speaking of living a life for which books have prepared us and also the themes of Fahrenheit 451, I'm very, very sad and sorry to report the passing of Judith Krug, Director of the American Library Association's Office of Intellectual Freedom and a true lioness of civil liberties. Her professional accomplishments and victories have had such a huge and resonating impact on readers, book creators, libraries, and the American culture at large. I know as the author of a challenged book and as an educator I was always very grateful for her presence in that position, and this loss will undoubtedly be felt very deeply and poignantly throughout the literary community in ways yet untold. I think the best way to honor her admirable commitment to her life's work is to continue it in her spirit, as each of us is able. Freedom to read!
Links are provided for informational use. Don't forget to support your local bookseller.
More Esmé stuff at www.planetesme.com.
Posted by Esme Raji Codell at 2:17 PM