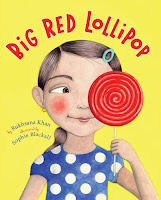 When I was teaching at a Chicago Public School, a wonderful, seasoned kindergarten teacher described a debacle:  a new student, from China, who barely spoke English, had been excluded from receiving an invitation to a birthday party that other girls had attended.  The new girl did not know what an American birthday party comprised, having never been to one, and if she wasn't invited, how could she learn?  The teacher's solution was to throw an "unbirthday" party in the classroom, in which everyone received a formal invitation, and the little girl was then comfortably welcomed into the culture of pin-the-tail on the donkey and candles on cupcakes.  The teacher gift-wrapped a book and read it aloud to the class, as a present to all!
I could not help remembering this story and that student's initial exclusion as I read the trials of Rubina, who is so excited to receive her first invitation to an American birthday party, but her mother's cultural background (Pakistani?) and new immigrant status does not allow her to recognize the faux pas in bringing an uninvited sibling as a guest to the fête.  Rubina is scandalized at being forced to have her little sister in tow, and to add insult to injury, she eats the coveted red lollipop that was in Rubina's goody bag.  The pathos is palpable:  "The worst thing is that all the girls at school know if they invite me to their birthday parties, I have to bring Sana.  I don't get any invitations for a really long time," and the accompanying illustration makes a poignant use of empty space, distancing Rubina from potential friends.  When little sister Sana comes home waving an invitation, it's a perfect opportunity for a ruthless payback; but instead, Rubina responds with empathy, and manages to convince her mother not to make the same mistake twice.  This ending is unexpected, graceful and kind, and especially refreshing in a literary world where children's realistic fiction can be so often unnecessarily--and unrealistically--snarky.  The story's framework is universal; pesky sisters, the excitement of invitations, trying to be included and grown-ups who just don't seem to understand are all themes that will have a lot of heads nodding and offers plenty to discuss. We have already enjoyed the illustrator's fetching line and stand-out sense of humor in JUMPY JACK AND GOOGILY

and most famously, the arch spot illustrations and covers of the IVY AND BEAN

series, but here her talent for human figure and expression are fully showcased.  This textured true-to-life tale has brought out the best in its creators, and will likely bring out the best in its readers as well.  (6 and up)
Also of interest:
More birthday books you're invited to read!

NOT LAST NIGHT BUT THE NIGHT BEFORE

by Colin McNaughton, illustrated by Emma Chichester Clark (Candlewick, 2009) Knock-knock!  Who's there?  A cavalcade of nursery rhyme friends, parading past a pajama-clad boy to deliver some late-night party tidings.  In the same spirit as Beatrice Schenk de Regnier's MAY I BRING A FRIEND

, it's fun to open the door to see what colorful guest appears, and even more fun to have such an energetic re-readable bedtime book to headline an evening's storytime wind-down.  With a British flavor befitting the literary guest list, the rhyme is by one of England's silliest, subversive and most celebrated children's poets ("Happy birthday to you, squashed tomatoes and stew!"), and I have to confess a personal propensity toward collecting everything drawn by Clark; her characters' open, cheerful faces are irresistible.  (3 and up)

by Stephanie Greene  (Clarion, 2010)  The author pulls off a major homage to Beverly Cleary's brilliant RAMONA THE BRAVE here, complete with a little sister shivering alone as she gets used to a new room, a know-it-all classmate a la the classic Howie Kemp and the appearance of a gorilla, though instead of a fearsome imaginary boneless one as was the case for Ramona, a baby gorilla is Sophie's heart's desire.  What's a girl to do after telling the whole class she's getting one and then not making good?  Oooh how delicious, it's the best wishful lie told since Irma Baumelin's

biggest doll in the world. Influence of predecessors aside, this book performs that impressive tightrope feat of taking the tribulations of the third grade seriously on behalf of its realistic characters, and Greene's voice is always believable and engaging (this book is quite girly-girl in spots for a class read-aloud, so I suggest boys might be more comfortable with the equally funny foibles found in this author's OWEN FOOTE

series).  Even if it turns out Sophie doesn't get exactly what she wants for her birthday, independent reading fans of classic realistic fiction who have been waiting for a contemporary character to love might find a wish come true.  (8 and up)

A BIRTHDAY FOR BEAR

by Bonny Becker, illustrated by Kady MacDonald Denton (Candlewick, 2009)  We know from A VISITOR FOR BEAR that Bear is the most insufferable curmudgeon since Sam-I-Am

, but really, it's hard to conceive that anyone wouldn't like a present on a birthday...so naturally, Mouse refuses to believe it, and perseveres in trying to get the celebration underway.  This short chapter bridge book for emergent readers has moments of sparklingly high humor:  Mouse disguising himself as Santa Claus in a ploy to get Bear to 'fess up to his true present-loving nature, and later, popping out of pastry with an accusatory "A-haa!  You do like birthday cake!" Personally, I hope Mouse finds a more appreciative amigo in the next installment; he has to work so hard and be so optimistic just to get that grouchy old Bear on board.  Huh!  Bear is awfully lucky to have you, Mouse, and so are we.  (4 and up)

by Hannah Shaw (Knopf, 2008) "Dear friends, I, Sneaky Weasel, invite you--yes you--to a party.  I am very rich and important, so don't be late."  Well, just because a guy is a show-off and a bully doesn't mean he doesn't want to throw a party once in a while.  Getting guests to show up when

you're a show-off and bully, however, is quite a different story, Weasel learns the hard way.  After visiting each guest and being reminded of his misdeeds, he works hard to redeem himself and even learns to say s-s-s-sorry.  Will he ever earn a full house full of friends?  From the endpapers featuring very funny classified ads for various Weasel-y entrepreneurial efforts to the amicable James Marshall-like mischief, we find here a villain to love to hate, and a book to love.  Besides, you've just got to get in on this...don't the bad boys always throw the best parties?  (5 and up) On a similar note, check out more well-meaning but only partial redemption of a picture book narcissist in Lucy Cousin's I'M THE BEST, in which a doggy has to find a balance between his own self-esteem and a recognition of what's best about his buddies. (4 and up)

Last and littlest and certainly not least, Sandra Boynton, the author/illustrator who brought favorites like MOO, BAA, LA LA LA

and BUT NOT THE HIPPOPOTAMUS to the preschool book basket has a brand new offering, HAPPY BIRTHDAY, LITTLE POOKIE (Robin Corey/Random House, 2010) following a piglet through his very exciting birthday from the pre-sunrise parental rousing and breakfast of porcine pancakes to the opening of the coveted gift of a Fuzzy Froggy.  As always, Boynton's rhymes are buoyant and feel more like a song lyric than a straight poem, and her expressive cartoon pictures convey the zany effervescence that is befitting of a toddler. "So here's to a child who is joyful and clever, / Happy Day, Happy Year, Happy Always and Ever."  Yes, those years cutting teeth in the greeting card business have paid off for Boynton here, and like a greeting card, this book ends with a perfect sentiment to someone we love.  (2 and up)
The party's over?!  No way.  Birthday reminiscences, more classic birthday books and a messy and delicious recipe just right for your own unbirthday planning here!
On a personal note
My son, mother and four of my oldest and dearest friends all share birthdays within a two-week span.
So may I say:
Happy birthday to you,
Happy birthday to you!
Happy birrrthhhdaaaay, darling Gemini loved ones,
Happy birthday to YOU!  (And many more!)