ME WITH YOU (PICTURE BOOK) 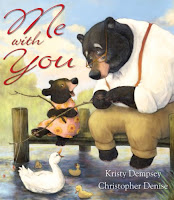 PICTURE BOOK
ME WITH YOU by Kristy Dempsey, illustrated by Christopher Denise (Philomel)
Oh, the pleasure of being able to truly be yourself around the people you love! That's what's celebrated in this picture in verse, in which a little bear girl plays within the warm circle drawn by her guardian. The slipcover suggests the big bear is "grandfather," but there is nothing in the text that explicitly says so, allowing the sentiment to be extended to father, kind uncle or friend, making it usable in Father's Day and other family storytime programs that include children who may not have traditional fathers in the picture. There is never a moment's doubt of the love felt by the bigger bruin, his heart clearly as broad as his muscles. Denise's artwork makes this book a stand-out in the world of lovey-dovey parent-child odes; beautiful computer enhanced paintings with a caramel palette play expertly with shade and light and mood. The balance of big and little and the exchange of vulnerabilities between them brings to mind Gabrielle Vincent's exquisitely tender Ernest and Celestine series (tragically out of print in the U.S.); like the series, this book that celebrates the strong, protective, loving and compassionate presence of the best men in our lives, so share this with the big bear in yours. Hurray for men who read aloud! (3 and up)

Still from the animated Ernest and Celestine.
Also of interest:
More papas and mamas! 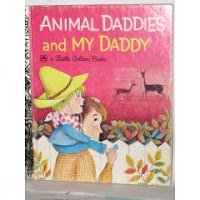 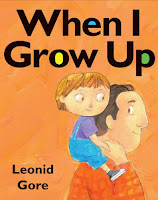 WHEN I GROW UP by Leonid Gore (Scholastic) What is a raindrop when he grows up? Part of the fastest river. What about the green sprout? The tallest tree the world has ever seen. The little chick becomes the loudest rooster, and the shadow grows to be the gentlest night. What will the little boy become? His wish is movingly depicted in his own artwork on the next-to-last page, with great effect. This lyrical book stands up under repeat readings, and speaks to the real ways children are inspired by the examples around them, both in nature and in people (speaking of, the cover seems to have elements of inspiration from Ilse Margret Vogel's cover from Barbara Shook Hazen's ANIMAL DADDIES AND MY DADDY, an out-of-print Golden Book). Simple, bright acrylic illustrations are accented with die-cuts, which aren't necessary but they sure are fun. (3 and up) 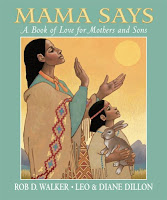 MAMA SAYS: A BOOK OF LOVE FOR MOTHERS AND SONS by Rob D. Walker, ilustrated by Leo and Diane Dillon (Blue Sky/Scholastic)

Mama says
Help others
And be the best you can
I listened to what mama said
And now I am a man.

Well, the dynamic Dillon duo has done it again, creating a breathtaking work of book-making that is truly universal in theme. Each page is advice written in verse being given by a loving mother to her son ("Mama says"), written in English and then another language (Amharic, Arabic, Cherokee, Danish, Hindi, Hebrew, Inuktitut, Japanese, Korean, Quechua and Russian), with round-framed ornamentation above the text and facing a full-color illustrated plate of a mother and son from the part of the world suggested by the language. 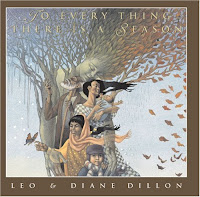 With every turn of the page, readers see that all mothers want the same things for their boys: to learn, to share, to be peaceful, to be honest, to have faith and respect, to keep trying. This book promotes global empathy and a moral imagination for what we share in common. In the same vein as their illustrated rendering of Ecclesiastes, TO EVERY THING THERE IS A SEASON, they employ a silky style both inimitable and unrivaled, any one of the pages a well-orchestrated visual delight worthy of a golden frame. Special attention was given to regional details in the textiles; look at those gorgeous patterns on the clothes! Also like TO EVERY THING THERE IS A SEASON, this book has a gift quality about it, and whether children will delight in this as much as grown-ups remains to be seen; the idea of a book full of parent's advice understandably has limited appeal to some children, but the spellbinding illustrations should certainly help...or get 'em while they're young and still listening with both ears. (5 and up)

And speaking of listening! I don't know how to upload audio to Blogger, but please scroll down to "Count Your Blessings" at Pat Fullerton's Tribute to Gordon MacRae site for another Father's Day treat! 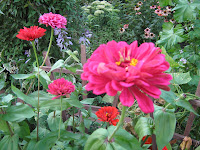 On a personal note
It's gardening time, have you planted your zinnias yet? They are my favorite flower, like little fireworks exploding against a green sky. They also share the name of a little girl I know who is one of my favorite writers! Here's a picture of the "State Fair" variety from my space in the community garden last year. They are easy to plant either in a plot or pot, and bloom again after cutting. I would encourage everyone to plant a few seeds this summer, 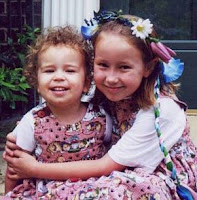 not only because they are so cheerful but because you can plant them in remembrance of young booklover Zoe Falkenberg and her sister Dana, who perished in the events of 9/11. "The zinnias can...serve as a reminder that each of us must create a world where all families can live out their lives in safety and joy." Please visit Zoe's Zinnias for more details.

Also, from one Esme to another, I wish to express my grief at the news of the untimely and unfathomable passing of Esme Kenney. Hers was a poem that was too short but none the less lovely.

But try not to be sad. That is not our job. Our job is to 1. be doubly happy to make up for all those children who didn't get to live and be happy, 2. Be grateful for family, and 3. Remember how bad people can be as a reminder of how good we have to try to be. Just try. Really, really try. P.S. It's hard.

Yes, my zinnias are planted and I, too, LOVED Mothers and Sons!

What a joy to run across your review of ME WITH YOU, Esme. I think Chris hit the emotional note right on the head with his art, too. I feel privileged to be a part of this celebration of those people who let children be completely themselves!

(One note, though. The book is published by Philomel, not Scholastic as it says in the header.)

What a lovely children's books blog - it warmed my heart to read about the "Me with You" picturebook - there's just something about animals - I'm a HUGE fan of picture books, and especially animals... one of my favorites: "Danny the Dragon Meets Jimmy: - very much worth a read. www.DannyTheDragon.com

Can zinnias take full sun and Florida heat? If so I will get some tomorrow! Thank you for the book reviews and the beautiful quote. It was one of my favorites from VIVE LA PARIS.

Thanks for the great review!!

Esme, it was such a treat to meet you at the Toni Buzzeo event! Thank you for collaring me and showing people STAMPEDE! I know I should've raised my hand when you asked what other authors were there, but that's hard to do! Anyway, thank you again!

And ME WITH YOU is just wonderful! Love that book.