FICTION
THE DEEP FREEZE OF BARTHOLOMEW TULLOCK by Alex Williams (Philomel)
In the tundra-like province of Pinrut, the inventive Breeze family is the last bastion of hope under the tyrannical rule of the heartless and blustery lord Tullock. He forces his enslaved minions to turn out the turnips from his endless, icy fields. Unyielding in their belief that the sun will return, the family continues to make wildly intricate and ingenious fans, so meticulously described that you can hear the gears turning and the metal unfolding like petals. When the real threat looms large that the Breezes will lose their precious home, the father and daughter decide to search for a land of heat using a flim-falmmer's map, while son and mother try to hold down the fort against an army of hammer-weilding heavies. The relationship between the brother and sister in the story and the influence they extend to each other across the miles through their examples is touching and refreshing, and the theme of families sticking together even when all hope is lost rings forever true. Apart from this, though, the fantastical story does not pluck any deep emotional heartstrings or offer any deep moral lessons, but if it's a great cinematically written adventure your reluctant reader is seeking, this book offers fire instead of ice. While the setting is definitely frigid, you may be surprised to find yourself sweating over this break-neck paced page-turner. Who can resist a story with famished, flailing octopi, a house that can fold in on itself, and a evil and enthusiastic taxidermist? This original feat is filled with secrets and surprises, and ends almost every chapter with a cliffhanger, or rather, glacier-hanger, perfect for hunkering down for a wintry read-aloud. Fans of MOLLY MOON'S INCREDIBLE BOOK OF HYPNOTISM by Georgia Byng and Laura Ruby's high-flying THE WALL AND THE WING will want to attend this snowy ball. (10 and up)
Also of interest:
Let it snow, let it snow, let it snow! 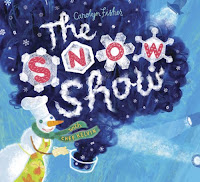 THE SNOW SHOW by Carolyn Fisher (Harcourt) Using a cooking show as a vehicle to teach children the process of evaporation, condensation and precipitation, a snowman joins sous chefs Snow White and Jack Frost to whip up some wintry weather. This book's execution lives up to its premise, showing the step-by step process with the eye-popping whimsy of Marjorie Priceman's HOW TO MAKE AN APPLE PIE AND SEE THE WORLD with the informational clarity and credibility of Molly Bang's MY LIGHT. The high-end science vocabulary is in a context that children can understand, and the text is used decoratively as part of the artwork. All elements crystallize into a perfect piece of picture-book nonfiction that no classroom or aspiring scientist should be without. Go to the author's site to download a free activity guide that, as the website states, will make you wish every day was a snow day. (6 and up) And speaking of... 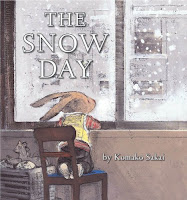 THE SNOW DAY by Komako Sakai (Scholastic) A rabbit boy watches the snow fall past his window. While his father's airplane flight is delayed, he shares a quiet day with his mother in their apartment complex, and an evening of making snow dumplings, until the chilly little son must be gathered in his mother's arms in the picture of warmth and comfort. Paint laid heavily on the page in shades of grey and blues and browns and wordless spreads thoughtfully placed perfectly capture the muted quality of light and mood that the weather brings. A gentle Japanese import with an understated, universal quality. (3 and up) 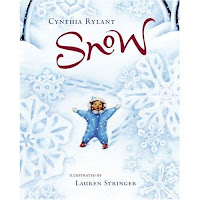 The best snow is the snow that comes softly in the night, like a shy friend afraid to knock...
What gloriously crisp illustrations grace this lyrical text, capturing a cold snap with a dreamlike glow and vibrancy not seen since the work of Barbara Helen Berger. It captures the chill and cheer so vividly, you may want to wear your winter scarf to the reading. Intergenerational images of a girl enjoying the weather with her grandmother are an added thematic bonus to an already beautiful book. (4 and up) 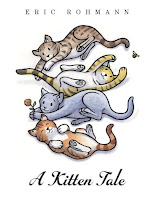 A KITTEN TALE by Eric Rohmann (Knopf) As the seasons pass, four kittens await their first snow with fear, but one lion-hearted soul can hardly wait to romp in it! With its paw on the pulse of its intended audience, this titles manages to capture the intense and genuine feelings of anticipation and trepidation when encountering something new. Sure, there are a lot of cat books, but don't be scared; this Caldecott-winning illustrator has made one that is as fresh as any snowflake. (3 and up) 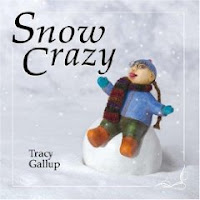 SNOW CRAZY by Tracy Gallup (Mackinac Island Press)
You know the kid: lots of miniatures lined up on the windowsill. Jars of seashells, stones, bones. Stops to look at bugs. Rolls Fimo dough into necklace beads, happy to spend the afternoon coloring, or cutting out...snowflakes? This author and dollmaker creates little books which affirm that child, and their willingness to turn small treasures round and round in the hand and in the mind. In this title, a girl is whisked away in her imagination by an old photograph of a girl standing in the snow, a girl who, like her, can't wait for that day when it falls from the sky to transform her world. The illustrations are quirky photographic stills of three-dimensional mixed-media models and scenes that Gumby and and fans of a kind of a certain kind of 1970's funky aesthetic will appreciate. Add this and Gallup's other titles, TREE CRAZY, STONE CRAZY and SHELL CRAZY to that child's eclectic windowsill or bookshelf. (4 and up) 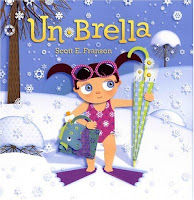 UN-BRELLA by Scott E. Franson (Roaring Brook)
Never mind the windchill, this little girl has a handy magical umbrella that allows her to brave the elements in her bathing suit. And when winter's done, she can make snowmen in the sun! How wonderful to have the weather you want wherever you go in this wordless picture book! Computer-generated artwork inspired by cut paper captures all of the seasons with a colorful sharpness, from flowers in bloom to the lacy wonderland of a January day. Besides being a whimsical flight of fancy that imaginative children will flock to, folks suffering from the "winter blues" may find that this is just what the doctor (and the librarian) ordered.
Still snow crazy? Check out When It Starts to Snow and other wintery reading picks. Most of the books I have written take place in Chicago, where the winters are long and the snow is deep (check out chapter four, "It Snowed and It Snowed and It Snowed" in SING A SONG OF TUNA FISH for the full-flurried effect). On these chilly days, I eat breakfast in my kitchen next to my window, where I can often watch the white powder falling, falling from the sky. Whenever I make these sopapillas, even though they are in the shape of snowflakes, I think of my friends in Texas and in Mexico, and I can practically feel the warm sun. This is also my son Russell’s favorite breakfast treat!
Ingredients:
Flour tortillas
Oil
Powdered Sugar
Honey 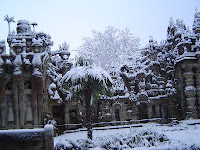 Fold a flour tortilla in half, then half again, and half again, so you have a triangle. Using a scissors, cut small shapes and score into the sides of the triangle without cutting all the way through, and then unfold. Heat a frying pan and add oil (kids, if you're reading this, get a grown-ups help as it gets very hot and might splatter!), then lay the tortilla on the heated oil until it browns (about 1- 2 minutes on each side). Lay on paper towels to remove excess oil, then transfer to a plate. Sprinkle with powdered sugar and drizzle with honey or syrup. Enjoy!
And thanks to Dianna Aston for introducing me to my first sublime sopapilla at El Sol Y La Luna in Austin! I'll never forget it.
Snowy scene from the incredible Palais Ideal built by Postman Cheval in Hauterives, France.
Links are provided for informational use. Don't forget to support your local bookseller.
More Esmé stuff at www.planetesme.com.

In light of our recent artic air that doesn't seem to want to disappear, I'm going to be featuring some snow themed picture books starting tomorrow and going through the week!

Between the books and the recipe, Winter all of a sudden seems a little bit more bearable!

My son and I just bought THE DEEP FREEZE OF BARTHOLOMEW TULLOCK and read it last night. We absolutely loved it. Tonight we are reading, ELIJAH'S COIN by Steve O'Brien. I am going to give this book to my son along with a coin. It has a very powerful message in it that I know everyone would benefit from. It kind of brings a tear to my eye. I wish I had this book when I was little.