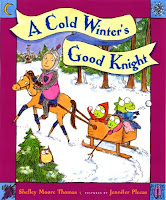 "I am colder than a snowball," said the first dragon.
"I am colder than an ice cube," said the second dragon.
"I am colder than a popsicle," said the third dragon.
The dragons' teeth were chattering so loudly that the Good Knight heard the noise all the way to the king's castle. So the Good Knight rode clippety-clop to the dragon's cave.
"Never fear, my dragon friends," he said. "It is warm in the king's castle. Methinks you will be toasty and cozy there."
Taken under this valiant protection of this Good Knight, three truly endearing little dragons join in a wintry party at the castle, only to inadvertently disgrace their guardian by setting the hearth fire to blazing with their fiery breath, hogging the harp, and literally swinging from the chandelier. Once corrected, they are rightly contrite and join the Good Knight in his efforts at gallantry. Just like real little children, sometimes the dragons don't even know they are committing a faux pas, and rise to the occasion when given a second chance. As is fitting for a reading feast, there is some meat on this bone; the author brings her own knowledge of children earned as a schoolteacher and storyteller to her writing. This book is so wintry, so festive, so subtle in its smartness and the expressions of the little dragons on the loose are just plain precious...all in all, this is a gem you will want to revisit long after the snow has been plowed. Luckily, there are many more "Good Knight" stories in the series, proving that chivalry isn't dead, and neither is read-aloud. (5 and up)

Also of interest:
More books for dragon slayers and dragon-hooray-ers!

MERLIN'S DRAGON by T.A. Barron (Philomel) The bat-winged lizard in this exciting story is small in size but big on bravery! Basil's challenge is not only to find the legendary Arthurian wizard in order to give him the warning that will save his life, but to face his own fears along the perilous journey. Besides the appeal of a charming, vulnerable small animal whose character is well-developed into the heroic, this book has another great strength: the fact that it is that hard-to-find, age-appropriate fantasy quest for the middle-grade reader, a.k.a. the holy grail of many a librarian's quest. Good humor and rich descriptions of a lushly imagined world round out this first volume in a high-flying trilogy. (10 and up) 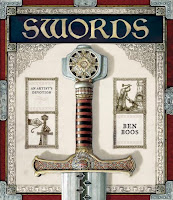 SWORDS: AN ARTIST'S DEVOTION by Ben Boos (Candlewick) "Devotion" is not a word written lightly here; the decorative hilts and handles, the well-weighed pommels and the gleaming blades, even a peacenik can't help but appreciate the great craft that went into these warrior tools. Carefully placed descriptions and history inform but never detract, and we are given the full tour of the sword through history and across continents. 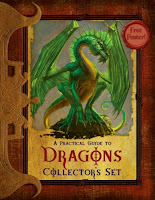 The detail of the artwork is so textural and vivid, you can almost hear the metallic ringing of a blade pull out of the sheath, and almost feel the carefully adorned indentations, cool beneath your fingers. One of the most beautiful nonfiction books of the year, this title is nothing short of sharp. Pair with A PRACTICAL GUIDE TO DRAGONS COLLECTOR'S SET by Lisa Trutkoff Trumbauer, and you'll have one well-trained squire. (9 and up)

EON: DRAGONEYE REBORN by Alison Goodman (Viking) Hot stuff, a dragon adventure that features a female protagonist! Eona disguises herself as a boy in order to be in the running to serve as the catalyst between the invisible dragons and her kingdom. Drawing from Japanese and Chinese mythology, this sophisticated read plays a lot on complicated court politics. Make sure to introduce Patricia Wrede's clever princess page-turner DEALING WITH DRAGONS and Franny Billingsley's gender-bending coming of age story, THE FOLK KEEPER (both 10 and up), as stepping stones to this high fantasy. (12 and up) 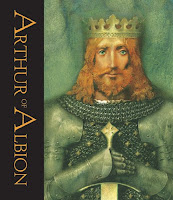 ARTHUR OF ALBION by John Matthews, illustrated by Favel Tatarnikov (Barefoot) I'd be lying if I didn't admit that Marget Hodges' MERLIN AND THE MAKING OF THE KING remains my favorite read-aloud introduction to Arthurian legend, but still, this gorgeous, more generous volume is sure to be a boon to Camelot's enthusiasts and experts, and equally sure to create some new ones. Misty, moody paintings deliver us into the woodsy grove and the world of Percival's grail, Sir Gawain's Green Knight, Tristan's dragon, the magic of Albion, the lure of handsome Lancelot and the lore of the ladies of the court (and the lake), the duplicitous Morgana and the insightful Merlin, this copious Medieval melange of straight narrative and short, descriptive introductions casts a charm that makes a space for every reader at the round table. (9 and up)
On a personal note:
Happy Kwanzaa! During this African-American holiday rich with symbolism, my favorite are the ears of corn (vibunzi, suke or muhindi), representing the number of children in the home, or the potential of children. They also represent an acknowledgment towards Native Americans, and the connection to them felt within the African American community. In honor of this idea, whatever your background, we can all get connected by sharing my very favorite, very easy corn pudding recipe that I learned from the most reliable cookbook author Susan Branch:
1 cup sour cream
1 14 oz. can corn, drained
1 14 oz. can creamed corn
1 egg, beaten
1 box jiffy corn muffin mix
1/4 tsp. cayenne
1/4 tsp. paprika
Mix all ingredients, then bake 1 hour at 350 degrees in a buttered 9" baking dish. Delicious served warm with honey or maple syrup! 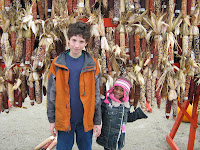 Two ears of corn for me! Blessings to my son and goddaughter!
Shop with Esme:
We tend to celebrate everything at our apartment, but whatever holidays you celebrate, I hope they were absolutely wonderful. My favorite Christmahanukwanzaakah gift I received this year came from my son, who surprised me very thoughtfully with a Snuggie, which

I guess is all over the television ads but he happened to spot it at a department store. It's a blanket with arms, which sounds silly, but actually, all day long every day since I got it, I can't wait to get into it and read Tove Jansson's A WINTER BOOK with the book light that comes in the same box! This Snuggie thing is a crazy indulgent book lover's perfect delight! Plus, you can wear it while you eat your corn pudding, it hides tummies very nicely! And, as a super bonus, you can look like a Franciscan monk draped in polar fleece! Take that, Paris Hilton, once again!!!

As a holiday gift, I sent a couple of my hard-working editors some crushed velvet over-the-knee socks, the kind that I wear everywhere all the time, because they are so toasty when worn over tights that you can wear skirts even in the winter and I figured any woman would want some. A friend pointed out that I probably came off as pretty strange and possibly lascivious by sending them, which hadn't initially occurred to me, but after some worry I trust they were received in the spirit in which they were intended, and fine, maybe I'll just send chocolate next year. At any rate, I hope you'll all treat yourself or someone you love to something cozy, for goodness sakes, get this New Year off on the right foot.

My son will be thrilled to hear there is a new Good Knight book! Thanks! :)

We've got the "Swords" book waiting for Isaac at the library this very moment. Your description sounds great! Can't wait to pick it up. "Arthur of Albion" looks like another one he'd enjoy...
Thanks for highlighting them!
Z-Dad

Okay, I might just have to buy the Snuggie! I have been wondering about the quality but you have sold me! Congrats on 200!

There is an excellent children’s book called Other People’s Shoes. It does a great job of teaching kids the importance of kindness inside of a very captivating story. You should check it out! Here is a link: www.eloquentbooks.com/otherpeoplesshoes.html

I am so glad you liked A Cold Winter's Good Knight! I had such a great time writing it. Thank you for recommending it on your site.