Happy first day of fall, my favorite season by far! As soon as the apples and gourds show up at the farmer's market, it's time to start haunting your house or library...there just aren't enough days to read all the good spooky and seasonal stories on the shelf! So let's get started with a... 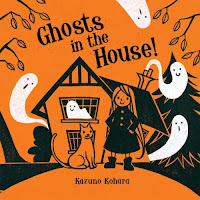 PICTURE BOOK
GHOSTS IN THE HOUSE! by Kazuno Kohara (Roaring Brook)
When a little girl moves into her new house, she finds it's haunted, but luckily, this is not just any little girl, but a witch who chases the ghosts down with the vim of a game of tag, and puts them to home decorating uses that Martha Stewart (or Martha Boowart?) would be proud of. Not since Linda Williams' THE LITTLE OLD LADY WHO WAS NOT AFRAID OF ANYTHING have we seen a pumpkin-pusher with such fortitude. Bold lino-cut lines and the limited palette of orange, black and white packs a punch, but the story is far more sweet treat than trick, making it a perfect atmospheric preschool pick. Jacques Duquennoy's inventive ghost stories for young children and Stephanie Calmenson's TEENY TINY TEACHER are both scandalously out-of-print, but if you can raise them from the great beyond, throw them into the storytime cauldron with some eye of newt or a few fig newtons, and mix well. (3 and up)

Also of interest:
I'm not ready to leaf you alone yet! Rake up some reading points with these fall favorites:

FALL IS NOT EASY by Marty Kelley (Zino Press) In this book, a tree tries to change color, and ends up looking like a rainbow, a hamburger, a smiley face and more! One of my storytime fall staples, I personally wouldn't go into autumn without it. It's so whimsical, you may want to balance your storytime with by some nifty seasonal nonfiction like Ken Robbins' AUTUMN LEAVES or PUMPKINS...if the children aren't too busy drawing their own trees in the midst of changes, that is. (4 and up) 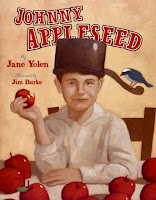 JOHNNY APPLESEED by Jane Yolen (HarperCollins) One of the most prolific children's authors tries her hand at separating the legend from the truth. Free verse and folksy, painterly art set this biography apart. Remember, Johnny Appleseed's birthday is September 26th! (8 and up) 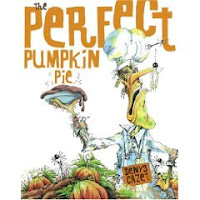 THE PERFECT PUMPKIN PIE by Denys Cazet (Atheneum) Another tried-and-true fall favorite! Slightly rowdy illustrations make this a pick for your older and more fortified group, who will howl and shiver as Mr. Wilkerson rises from the beyond in order to bully a piece of perfect pie from Jack and his fearless grandmother. A balanced combination of put-the-flashlight-under-your-chin-and-speak-slowly prose and join-in-the-refrain verse ("Pumpkins, pumpkins, pumpkin pie!/ I must have one before I die./ It must be round and brown as toast/ Or I'll haunt this house as a hungry ghost") will make for perennial pumpkin fun. Just as a perfect pie must have all the right ingredients, so does this book have the right dashes of fright and delight, and as the ending suggests, old Mr. Wilkerson may put in a few more appearances before all is said and done (apple pie, anyone?). Believe me, if you stood in line for a half an hour at the bakery, you could not come up with a more delicious fall storytime treat. (7 and up) 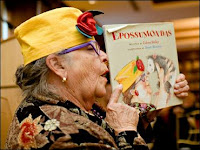 On a personal note:
This week we lost a true legend of children's literature. Coleen Salley was a distinguished professor of children's literature at the University of New Orleans, a celebrated storyteller, the author of several books for children including the famous EPOSSUMONDAS series of picture books illustrated by Janet Stevens, a children's books salon hostess, a Mardi Gras queen and and a bit of a character out of a children's book herself. But for all of these titles she wore with grace and spirit, the moniker I think of immediately is friend; she was a friend to all booklovers, and to all who created books. The first time I met Coleen was when I was attending a conference in New Orleans. I was a brand new author out of the gate, and she had invited me to her cozy home in the French Quarter, which was awash with books (of course), an impressive collection of kitchen witches and Bremen Town Musician collectibles, 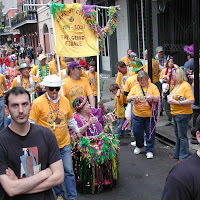 authors and illustrators with otherworldly talents whom I had admired for years shmoozing from room to room like ordinary people; I remember sitting in her garden with Trina Schart Hyman as if it was a dream. And, like music floating in the air was her lovely southern drawl, ordering folks to try her homemade grits (delicious). Wherever she was, that was the place to be; she knew how to turn her cozy spot in the French Quarter into a literary Mount Olympus, she knew how to turn a Holiday Inn hotel room into sparkling party setting worthy of an Auntie Mame. She knew that books were a connecting force, and she was the living conduit. What impressed and inspired me was the feeling of sincere welcome that she emanated, without any pretension, and the feeling that who you are and whatever you have to give the world was enough, as long as you gave it all you've got. To know Coleen was to be under her wing and to be her special "dawlin," but this was not a sparrow's wing, this was the wing of a mother phoenix! Wherever she sat, that was the table that was laughing the hardest; wherever a bugle call sounded for literacy, she was leading the charge and wherever there was a new author or illustrator, she was there with words of encouragement, leaning on her cane to start the standing ovation. It is you who deserve the ovation, dear Coleen Salley! In Frank Capra's movie It's a Wonderful Life, the angel suggests that "no man is poor who has friends," and surely, Coleen died one of the richest women in the world. To say she will be missed is a laughable understatement and to try to measure her influence would be impossible, but her spirit lives on and on in the example she set for a brave life well lived in the service of children and art. I was blessed beyond measure to know her, and I wish I could give her one more hug and say thank you one more time...though that's a lie, a tall tale, a yarn. Because even a thousand more times would never be enough, dawlin'. 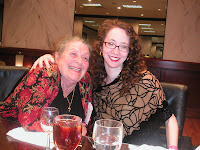 Kimberly Willis Holt has written an outstanding tribute that captures some of her inimitable and contagious joie de vivre. Please check it out as well as tributes linked from Chicken Spaghetti, and then please consider honoring her memory by making a donation to her foundation with the special mission of connecting children with the real people behind the books. Yes, her spirit lives on!
Links are provided for informational use. Don't forget to support your local bookseller.

My dear friend Esme,
You've captured the essence of the Queen...she'd be proud!
Her jazz funeral allowed my tears of sadness to turn to tears of joy.