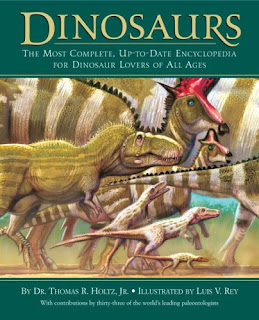 "Will Jurassic Park Ever Happen?" and "The Science of Dinosaur Art," t

pull-tabs, fold-outs and posters. Amidst all the action is a ton of information, photographs and fetching natural illustrations, all broken down into chunks of appealing dino-trivia. This wild museum-in-a-book approach assures that kids come away knowing something they never knew before, and makes it an extreme winner with relctant readers. (7 and up) 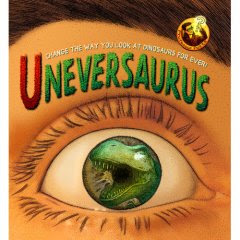 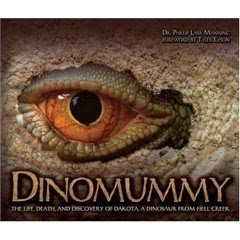 The great strength of this book is that it captures the real-life excitement of being a scientist; any child who has dreampt of being a paleontologist will thrill to the excavation of Dakota, the most complete mummified dinosaur fossil ever found.This book has a definite "WOW" factor, not from gimmicks but from a real story of discovery that was supported by the National Geographic Society and contained such sensitive scientific information that the title was under worldwide embargo until December. Now's your chance to have a look. (9 and up) Kids who are interested in DINOMUMMY may also enjoy the novel MY DANIEL by Pam Conrad (HarperTrophy), the page-turning tale of children on a Nebraska farm whose desperation compels them to become involved in unscrupulous dinosaur fossil hunting on the prairie, with tragic results. (9 and up) Links are provided for informational use. Don't forget to support your local bookseller.
Posted by Esme Raji Codell at 7:55 PM

I love the new look, but I have a question, if you don't mind. What are you reading in the picture?

Thanks for the great recommendations!

Thanks, Sheila! Still "tweaking" the page but hopefully for the best, so thanks for your encouraging words. The book I am reading in the photograph is the hilarious but sadly out-of-print OTTO: THE STORY OF A MIRROR by Ali Bahrampour. I will add this info permanently to the picture as soon as I figure out how. :-)

Thanks for sharing info about nonfiction children's books. So many students would enjoy (and prefer) information books for independent reading, but I want to find "high interest, low reading level" books.