Well, spring has sprung, and so has the new book season, so, as promised, it is time to look back on all of the best of the best of this busy year! It was a frenetic 2007, moving the bookroom and having worked full-time as a school librarian, but I still managed to consider over seven hundred titles. Of that bevy of books, here are the bunch that rose to the top, the cream of the crop! When I look at this list I am renewed in my resolve that children's literature is our best hope for equalizing education and that even when schools fail, children don't have to, with the help of all that books have to share. History! Arts! Poetry! Astrophysics! Beautiful multicultural offerings! Laughter! Adventure! It's all here, folks, but best of all, when I look at this list, I see books that kids will actually enjoy! I hope this will be handy for folks looking to confidently build family collections, choosing perfect gifts for beloved children or developing collections for their school or public libraries, and for authors and illustrators looking for publishers that support the kind of books they are creating. I have to make a few special commendations:

Made me laugh the hardest:
17 THINGS I'M NOT ALLOWED TO DO ANYMORE by Jenny Offill, illustrated by Nancy Carpenter (Schwartz & Wade, 2006) (even though it was very naughty)
DEAR MISS PERFECT: A BEAST'S GUIDE TO PROPER BEHAVIOR by Sandra Dutton (Houghton Mifflin)
SQUIRREL'S WORLD by Lisa Moser, illustrated by Valeri Gorbachev (Candlewick)
STARRING MISS DARLENE by Amy Schwartz (Roaring Brook)

Made me cry every time I read it:
HALF A WORLD AWAY by Libby Gleeson, illustrated by Freya Blackwood (Scholastic)

My favorite book of the year:
ARTIST TO ARTIST: 23 MAJOR ILLUSTRATORS TALK TO CHILDREN ABOUT THEIR ART to benefit the Eric Carle Museum of Picture Book Art (Philomel), tied with
HERE'S A LITTLE POEM: A VERY FIRST BOOK OF POETRY by Jane Yolen and Andrew Fusek Peters, illustrated by Polly Dunbar (Candlewick) (my new favorite baby gift)

Book that deserved a prize even if the illustrator doesn't have any more room on the shelf:
HOW TO PAINT THE PORTRAIT OF A BIRD by Jacques Prévert, illustrated by Mordicai Gerstein (Roaring Brook Press)

Book that isn't on the list because I didn't get to it but it was my son's favorite read this year:
FROM CHARLIE'S POINT OF VIEW by Richard Scrimger (Puffin) (thanks, Russell!)

Now's the time to fix yourself a cup of tea or fetch a pint of Ben and Jerry's and look over this index, below. As a special incentive, if you "comment" below on your favorite pick or make your own addition or category by March 31st , U.S. residents will be entered in a random drawing for the new unabridged Listening Library undabridged audio version of VIVE LA PARIS, narrated by Tichina Arnold (of Everybody Hates Chris fame!) on CD, a $38.00 value! 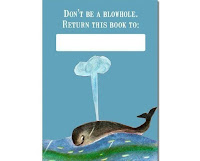 And if you need bookplates for your new acquisitions, shop with Esme at One Good Bumblebee (the "don't be a blowhole, return this book" plate kills me!) and the super snazzy personalized retro plates at The Paper Princess make amazing gifts for booklovers or baby showers. Both purveyors are from Etsy, oh, the joys of shopping handmade! I have to confess, though, my standard is still the Aliki "Sharing" plate from Kidstamps, who also have rubber stamp plates, and then there is the insane dream-come-true website My Home Library with gorgeous downloadable bookplates designed by primarily British illustrators, like Quentin Blake and Tony Ross and Brian Wildsmith! I kid you not! So go look, and come back!

For your convenience, I have added links to my review or Amazon (I actually evaluated more books than I was able to review this year, though I will try to continue to write them up). Keep in mind, I link to Amazon because it is such an amazing clearinghouse of reviews and information, but it's always a good idea to support your local independent bookseller, because then you are supporting your own community! I also played a little catch-up, and those books are so marked; you can see a complete list of 2006 PlanetEsme Picks and even further back at planetesme.com. I'm glad PlanetEsme can be a place where the door to finding the right reader is always open, whatever the year of book publication.

Thanks again for your patience and support this past year, and for all of the years! I look forward to what 2008 has in store...titles have already arrived, been read aloud and are queued up for review, so I hope you'll check in again. Happy reading, everyone!!!
Girl reading in library clip art by Mark A. Hicks, via Discovery Education.
Links are provided for informational use. Don't forget to support your local bookseller.
Posted by Esme Raji Codell at 1:03 AM

Thanks, Esme. I'm honored to be part of such a stellar list!

I'm glad I wasn't drinking tea when I saw the list -- I'd have choked on it! Thank you so much for including A Crooked Kind of Perfect on your list.

Tis been worth the wait, and your excellent lists have appeared with perfect timing---we're on Spring Break until March 31. I'm off to the library!

My personal favorite was The Arrival--Tan, my 5-yr-old daughter would pick Penguin--Dunbar or The End--Rochelle. I'd have to pick The End for all-round fave since my wife and I got more requests from our daughter for that for read-aloud AND my second graders not only liked it AND used it for cause and effect, but requested it read again for fun. Always a good sign.

I'm sputtering over my virtual cup of tea along with Linda in delight. Thanks so much, Esme, for the shout out about Rickshaw Girl.

I really loved The Invention of Hugo Cabret and though it would be tough to read aloud to a group of 33 students-this would be a great bedtime story!! My son's favorite (he's only 2) of the year would have to be Diary of a Fly...he's obsessed with the picture books by Doreen Cronin :)

Count me in as another author who is pleased as punch to have his book included on your list of bests. Thanks, Esme!

Thank you for putting together this list, and for all of your reviews. Your picks never miss with my kids.

Most of our favorites from last year are on your list, but here are some others we liked:

The Talented Clementine, by Sara Pennypacker
Gravity Buster, by Frank Asch
The Thing About Georgie, by Lisa Graff

Esme, I just read When Is a Planet Not a Planet? The Story of Pluto with my fourth grade son... who is still spongin' up facts. We BOTH learned a month's worth of science lessons in a few nights. This book should be on every elementary school science teacher's bookshelf. Just think of all the applications!! Shelley

So many of my favorites are there...who could resist the first line of Evil Librarians of Alcatraz or the boys who master the Dewey system because they aren't going to let a librarian outsmart them! Two favorites I don't see are: The Very Ordered Existence of Merilee Marvelous by Suzanne Crowley- poignant story about a girl with asperger's and The Name of this Book is Secret- a great book for boys. I loved, loved, loved them.Thanks, Esme for being there for us!

who is the artist?

any recs for sites to find such prints for classroom walls and the like?

Amy S., the artist is Mark A. Hicks, he did a nice job, didn't he? This and other thematic clip art may be found at:
http://school.discoveryeducation.com/clipart/

Wonderful list! Thank you again for all your insight. I love Polly Dunbar's illustrations (of Here's a Little Poem). So fanciful! I salivate whenever I see one of her books. And you know I gotta shout out to all collage artists!

Being included on your list gives me goosebumps! Thanks, Esme!