THE DOG WHO SAVED SANTA and HOLIDAY PICKS!

Ho-ho-ho! Time to start filling sleighs and days with perfect holiday picks hot off of the jolly elf shelf: 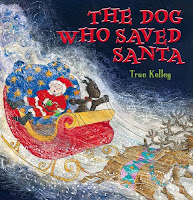 THE DOG WHO SAVED SANTA by True Kelley (Holiday House)
Uh-oh, young Santa turns out to be a bit of a slacker, munching on fruitcake and shlumping in front of the television while his elves knock themselves out to make deadline. With the help of a motivational video, "Take Charge of Your Life," a plucky pup is determined to help Santa live up to his reputation! Thanks to the dedication of his trusty dog, Santa learns geography, gets a little dose of driver's ed and is back in that reindeer saddle before long. Now...does the Easter bunny need any help? This author knows how to write picture books that tickle the funny bone and inspire requests for re-readings from children who think they are too old for picture books. A sleigh-full of kid-friendly good humor is in these bindings, along with a subtle message that even Santa wasn't born great, he had to work at it. (7 and up) 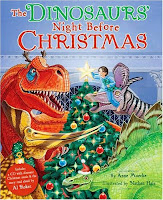 THE DINOSAURS' NIGHT BEFORE CHRISTMAS by Anne Muecke, illustrated by Nathan Hale (Chronicle) A rhyming midnight romp in a museum is a holiday dream come true for the hero of this book, and is sure to replace visions of sugar-plums dancing in the head of a young dino-loving reader. At first, I was concerned about the resemblance of the book to the popular HOW DO DINOSAURS series by Jane Yolen and Michael Teague, but on closer inspection, the detailed, jewel-colored illustrations have a style all of their own. The book, despite mushy bouts with mistletoe (have you ever been kissed by a Tyrannosaurus?), manages the trick of maintaining the slightly scary and very toothy spirit of the Mesozoic in the context of the holiday season. The volume comes with a 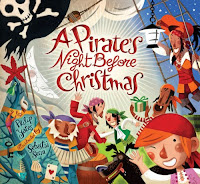 CD which includes dinosaur carols. The "Allosaurus Chorus" and "Hark! The Pterodactyls Sing" may prove to be an evolutionist's nightmare come true, but may also be a future favorite at secular holiday assemblies. The musical tributes to Dino Kwanzaa and Dino Hanukkah did not go unappreciated. (6 and up) Children who enjoy this kind of riffing on classics may also find treasure in A PIRATE'S NIGHT BEFORE CHRISTMAS by Philip Yates, illustrated by Sebastia Serra (Sterling); the team of seahorses ("On, Salty! On, Scurvy! On, Sinbad!") was an especially nice touch. (6 and up) 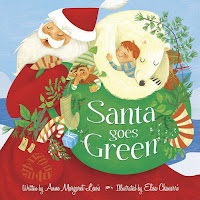 SANTA GOES GREEN by Anne Margaret Lewis, illustrated by Elisa Chavarri (Mackinac Island Press) I'm not sure if Santa has an agenda, but if he did, I imagine that leaving the earth a better place for future generations of children would be on it (not to mention that he must be concerned about global warming, with all that real estate in the North Pole). In this book, Santa listens to a boy's wish for help making the world a better place, and manages to improve the sustainability of his own large scale productions. Despite the strong message, the storyline has a viable and readable arc, and Elisa Chavarri's artwork is a standout, with illustrations are as crisp and lovely and alluring as a wrapped package on Christmas day. Thematically, this is a useful classroom holiday read-aloud, and a nice teacher gift as well. (5 and up) 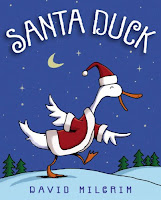 Nicholas Duck had only one day left to find Santa.
"If I don't tell him what I want," he quacked,
"it's going to be another year of socks and underwear."

Quacking voice? On the first page? Somebody knows something about read-aloud up in here! Walking around in a Santa suit that has been mysterious left at his doorstep, Duck becomes the unwitting ear to all holiday requests of all the neighborhood animals (Rabbit's request: "all I want is a carrot cake/The size of a football field/Don't forget the frosting"). 'Tis better to give than to receive in the funniest holiday book of the year. (5 and up) 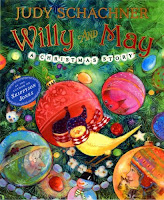 WILLY AND MAY: A CHRISTMAS STORY by Judy Schachner (Dutton) From the author who brought us the wildly popular bilingual chihuahua SKIPPYJON JONES, we have here a holiday return to her earlier style, that focuses on humans. In this story, we feel the closeness of a girl to her elderly aunt and her pet bird. Making pies, listening to phonograph records, splashing in a pond and decorating a tree, the years passed are filled with great memories of being together, so no wonder the narrator is palpably disappointed when family circumstances mean they may not be able to spend the holiday together this year. When Willy and May manage to show up amidst a snowstorm, its a Christmas miracle! I must confess to a twinge of melancholy while reading this book, thinking of all the children who have a parent serving in the military overseas, and families who have had to curtail their traditional treks to the homes of distant relatives because of the economic downturn. But stories about wishes coming true are fair game for Christmas, and this in particular serves as a reminder that simply being the company of one other is indeed a marvelous gift. What I like about Schachner's people-centered books is that there is an undercurrent of invention; these books are always, below the surface, idea books. Her characters are examples, models of fun, eccentricity and generosity of spirit. She depicts children showing love through the artwork that they do and the initiatives they take, and she depicts this with a sincerity that verges on defiance, or maybe its simply faith, but definitely a pronouncement of sorts: "people are good." The illustration of the girl cutting out snowflakes from newspaper captures every ounce of the joyful anticipation of the season and the longing to contribute to the loveliness all around. Sigh! (7 and up)

PENINA LEVINE IS A POTATO PANCAKE by Rebecca O'Connell, illustrated by Majella Lue Sue (Roaring Brook) The holiday blues aren't just reserved for Christmas! When Penina realized that her Hanukkah is setting up to be a bummer, she decides to take action to get her family and friends back into the holiday groove. Penina is a funny friend in print, a character with so much that her readers will identify with: Have you ever had a teacher leave in the middle of the year? Felt like a parent wasn't listening? Tried to dress up a traditional recipe (peanut-butter-covered latkes, anyone)? Made homemade holiday gifts? Ahhh, nothing like a good piece of realistic fiction! Beats peanut-butter latkes any day. (8 and up) 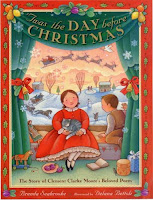 'TWAS THE DAY BEFORE CHRISTMAS: THE STORY OF CLEMENT MOORE'S BELOVED POEM by Brenda Seabrooke, illustrated by Delana Bettoli (Dutton) Clement Moore promised his children the special gift of a story. A poem would be all the better....it's harder, after all. But where can he find the inspiration? This true story of how the season's most celebrated piece of verse came to be doubles as an interesting look into the whirling snow-globe of artist inspiration and process. A wonderful period piece is enhanced by eloquent vocabulary and decorated with scenes that are as charming as a store Christmas window. It includes the full text to "The Night Before Christmas," Clement's gift to his children and to the world. What story can you tell that will be a gift in the hearts of your family? (7 and up) 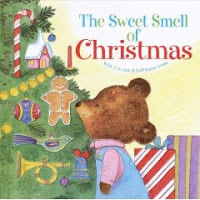 These are some of the newer holiday titles, but sometimes oldies are goodies! I remember my favorite as a child was Patricia Scarry's THE SWEET SMELL OF CHRISTMAS (3 and up), in which the hot chocolate magically smelled like hot chocolate mint and the Christmas tree smelled like pine and the candy canes smelled like...well, you get the idea! One of the great joys of the season, I think, is sharing what you enjoyed as a child. More recommendations for great holiday reads in the Seasonal Archive. 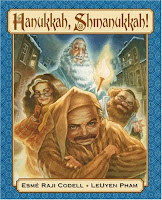 And, at the risk of shameless self-promotion, may I remind you about HANUKKAH SHMANUKKAH, illustrated by the brilliant LeUyen Pham (Hyperion) (ages 8 and up). This kosher Christmas Carol is an Association of Jewish Libraries notable book, and explores the Jewish-American experience in the context of the past, present and future. A full reader's theater script is available on-line for free download, which may be handy for classroom use or speaking in parts around the family table. Oy, books are so much fun!

On a personal note:
I've been very busy writing a guide for first-year teachers for the new year, so thanks for your patience with the pause in my postings. I've fallen a little behind, but I hear Santa has, too, so at least I'm in good company! Please check back, I'm going to try my best to post several more recommendations for terrific books in the next few days. And thanks to everyone who came to the PlanetEsme Bookroom for the kids' open mike, you all shone brighter than the star at the top of the tree! Season's readings, everyone!
Links are provided for informational use. Don't forget to support your local bookseller.
More Esmé stuff at www.planetesme.com.

I'm finishing up a year of full-time student teaching. I did one semester teaching 6th grade in Kalamazoo, MI and now I have one semester in special ed at the same school. I would LOVE LOVE LOVE to read your book for new teachers. I LOVE all your books and Educating Esme was wonderful. When is the book expected to come out and what is the title? I'd love to pre-order it.

Have you heard of power teaching? That's the best teaching method I learned about during student teaching. I actually found it on TeacherTube but asked my mentor teacher if I could try it out and I was able to get a lot of practice using it. It's a really exciting way to teach.

This is a terrific list, thank you! I can't wait to read Judith Schachner's WILLY AND MAY--I'm not Skippyjon Jones's biggest fan, but I love YO, VIKINGS--for exactly the reasons you mention. Thanks again!

I recently came across your blog and have been reading along. I thought I would leave my first comment. I don't know what to say except that I have enjoyed reading. Nice blog. I will keep visiting this blog very often.

A friend told us you (Esme) reviewed our book, Santa Goes Green and that you loved it. Thank you !

We are going to look at your books this week.

I think we are the only publisher to preview our books--every single page--online for free.

You can see them at http://www.mackinacislandpress.com and click on free previews.