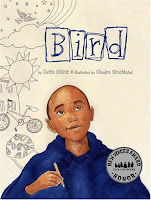 FICTION
BIRD by Zetta Elliott, illustrated by Shadra Strickland (Lee & Low Books)
Once I told Uncle Son
I wished I could play the saxophone
like Charlie Parker.
Uncle Son just shrugged.
"That other Bird--he's alright.
But don't you waste your time trying to be like him.
You just remember,
everybody got their somethin'.
And that includes you.
An artistic little boy's family is torn irreparably asunder when the brother he idolizes gets involved with gangs and addicted to drugs. This story sensitively juxtaposes two different approaches to life and urban problems by the two young men, but never resorts to stereotyping, as the grandfather and grandfather's best friend, "Uncle Son," maintain a strength and offer a mentorship that gets the boy through to a future his brother never saw. Also unexpected in this book are the redeeming qualities of the sick brother. Even in his diminished state, he tries to critique his little brother's art constructively, and gives him a gift to help him along, underscoring a goodness and value in all people, even the people who might ultimately let us down. This is a short, complex picture book that makes no attempt to simplify or sugarcoat the issues with which it contends, but still, there is a delicate grace to it, as fine as the pencil drawings that depict Bird's inner, imaginative world, and against a city backdrop that is undeniably beautiful, in spite all of its dangers, to the creative eye that can see it. The motifs throughout that allude to Charlie Parker are like a base line to the theme of the loss that occurs when creative people fall victim to their addictions, a loss not only to their families but to the world.

Throughout this book, I was reminded of some old-school classics like the "sleeper" Newbery Honor winner THE JAZZ MAN by Mary Hays Weik, illustrated by Ann Grifalconi, the spirit of urban jubilance in spite of all odds captured by Vera Williams, the candor and new ground broken by the early picture book work of John Steptoe, the one-two punch of Alice Childress's now dated but still powerful young adult novel A HERO AIN'T NOTHING BUT A SANDWICH, and Hope Anita Smith's more recent THE WAY A DOOR CLOSES, all unflinching, all beautiful. As we approach the award season for children's books, we'll see if BIRD is welcomed into this canon. Whether it is recognized or not, Elliott's offering resonates in the reader, and for all of the seriousness that may make a grown-up balk, it puts into print an important, and unfortunately recognizable, situation for many young people who will be fortified by the high note of hope upon which this sad song finishes. (8 and up)
Also of interest:
BIRD may have been inspired by Charlie Parker, but I'm sorry, all through I was feeling Charles Mingus's "Goodbye Pork Pie Hat". But hey, let's not fight and argue...instead, let's riff on BIRD's undercurrent of jazz! 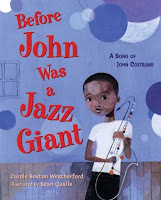 BEFORE JOHN WAS A JAZZ GIANT: A SONG OF JOHN COLTRANE by Carole Boston Weatherford, illustrated by Sean Qualls (Holt) Even jazz giants were children once, and this little be-bop baby knew how to put on his listening ears. Gorgeous angular illustrations are bespeckled with bubbles of music floating through the air, and seem inspired by Picasso's Old Guitarist. This author also has an accomplished young adult novel out this year,

BECOMING BILLIE HOLIDAY, illustrated by Floyd Cooper (Wordsong), that is getting lots of buzz but pulls no punches when it comes to the bluest parts of Lady Blue's youth, including turning tricks and smoking weed, so if you have a little jazz bird you might prefer to start with the biographical compilation SOPHISTICATED LADIES: THE GREAT WOMEN OF JAZZ by Leslie Gourse, illustrated by Martin French (Dutton), which gives brief but still honest and inspiring portraits of greats such as Billie, Diana Krall, Sarah Vaughan, Ella Fitzgerald, Rosemary Clooney, Anita O'Day and many more. Talk about women who knew how to make a joyful noise, in spite of anything! Sing out! (10 and up) 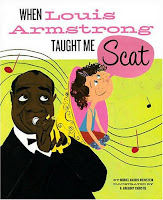 WHEN LOUIS ARMSTRONG TAUGHT ME SCAT by Muriel Harris Weinstein, illustrated by R. Gregory Christie (Chronicle) Oooo, hope you're tongue is in good shape, because it's going to get some double-dutch action in this read aloud, and when you're done, you'll be scattin', cat, and your little listening kitten will be smitten! Christie's retro illustrations really swing, and any time spent with Satchmo is sweet, sweet, sweet. (6 and up) 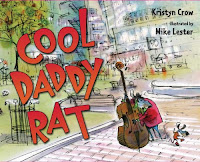 COOL DADDY RAT by Kristyn Crow, illustrated by Mike Lester (Putnam) A little rat stows away in his father's music case, and joins his daddy through the clubs, rooftops, cruises, parties and street performances on a New York City night. Daddy rat really is cool, just the guide you'd want, and the love and pride the little boy has for his musical dad is a subplot all its own. Loose lines vibrate on the page like a bow to the string. Like a good jazz progression, this author and illustrator makes beautiful music together and they make it look easy, but there is a particularly marvelous artfulness to their combination, and a real love of the city and its rhythms that come through most contagiously. Delightful to read to one child or a whole group, it's bound to be a surprise favorite that bears repeated reading, probably best shared with a big bass strumming in the background...but in its absence, a little exuberant heartbeat will have to do. (5 and up) 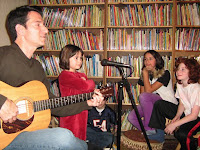 Here are a few of my favorite jazz birds,
who stopped by to perform at a children's open mike
I held recently at the Bookroom.
"Straighten Up and Fly Right!" "What a Wonderful World!"
Links are provided for informational use. Don't forget to support your local bookseller.
More Esmé stuff at www.planetesme.com.

Thank you for such a lovely, thoughtful review, and for situating BIRD in "the canon"--I was definitely influenced by other books about urban children by authors like Ezra Jack Keats and Lucille Clifton. Your blog is fantastic--keep up the great work!