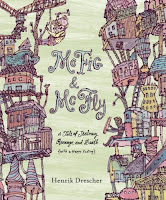 PICTURE BOOK
MCFIG AND MCFLY: A TALE OF JEALOUSY, REVENGE AND DEATH (WITH A HAPPY ENDING) by Henrik Drescher (Candlewick)
Widowers and neighbors McFig and McFly hit it off big time; they have so much in common. Their children enjoy playing together, and their houses look exactly the same. But when McFly makes use of some spare lumber to make a small addition to his abode, so begins a rivalry that climbs sky high. From bungee-jumping platforms to flying buttresses to Egyptian pyramids to garbage-can weather vanes, "helter-skelter the ramshackle towers rose. What wasn't tick-tacked together with glue, nails or bubble gum was tied together with shoelaces or spaghetti." When the unwieldy contest finally leads to an untimely demise, it is left to the children to make peace, a yard sale to end all yard sales, and a home that they can share. Embracing the spirit of the truly absurd with an artistic bravery and abandon that the artist has cultivated through his career, the illustrations are fittingly wonky, inky and oddly disconcerting, as if done by a young boy who has spent his day laboring on creating the Word's Greatest Picture with his set of markers. This effort will not be lost on children, who will shriek with delight at the increasing preposterousness and height of the architecture, culminating in a vertical pop-open display. A great cautionary tale about the pragmatic benefits of love and cooperation, and though the buildings are dismantled, the lesson stands: love thy neighbor, or else. (7 and up)

Also of interest:
Other towers of power! 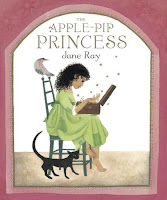 THE APPLE-PIP PRINCESS by Jane Ray (Candlewick) Perhaps a version of MCFIG AND MCFLY with a more feminine touch, we have three princesses vying for the inheritance of a kingdom by showing their father they can make him proud. One sister builds a tower made of all the wood in the kingdom, and another with all the metal, ignoring the repercussions of their ruthless demands on their subjects. The youngest sister simply plants her mother's seeds, and in doing so, replenishes the spirits and resources of her land. 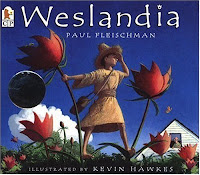 A timely allegory about the power to be gained by putting into the earth once in a while instead of taking out all of the time, it is nicely paired with Paul Fleischman's WESLANDIA, about a boy who builds his utopian society using a mysterious crop, or as a pairing with magical folkloric stories of sibling rivalry such as Robert D. San Souci's THE TALKING EGGS. Jane Ray's illustration style is distinctly lovely; beautiful multicultural princesses and landscapes glow against blues and greens and glowing bronzes. Sure to plant a few good ideas for the future. (6 and up)

THE THREE ROBBERS by Tomi Ungerer (Phaidon) A touching, classic story about three scary robbers who collect a lot of gold but don't know what to do with it, so they build a home for lost and unwanted children. The children grow up and form a town, in which they build three towers, in honor of their foster fathers. Sniff, sniff! And anyway, it's always hard to come by a really good earnest robber in a story for young children in these dreary PC times...though there's a fine dramatic baddie to be found in Ungerer's CRICTOR, too. Somebody knew what kids like! (5 and up)
Links are provided for informational use. Don't forget to support your local bookseller.
More Esme stuff at www.planetesme.com.