HAPPY NEW YEAR and HAPPY BOOK BIRTHDAY TO ME!

Talk about getting off on the right foot, early January marks the release of my own picture book, FAIRLY FAIRY TALES

(Aladdin, 2011).
The inspiration for this book started with an experience I had reading aloud Paul Galdone's CAT GOES FIDDLE-I-FEE

to preschoolers, in the style taught to me by my former boss and mentor Andy Laties

. I hold up the book, where there is clearly a picture of a duck, and carelessly say it is a picture of a tractor, or a pizza, or a rhinoceros, or a pair of underpants. The children immediately correct/chide me.  "Nooooooooo!"  What fun to correct dumb grown-ups!  Later, when I was working on a book about preschool, I visited a classroom to brainstorm about what should go in it,  and remembered this tack.  I showed them a bunch of pictures of things that might be in a classroom, such as blocks, a sand table, chairs, and...a Tyrannosaurus Rex.  "Nooooooo!" cried all the children, except for one boy,  a literalist, who promptly went to the toy box and pulled out a seven-inch plastic dinosaur.  "Well, maybe," I had to concede.  We were off and running.  Space alien?  Well, maybe, if one landed from Saturn.  Cupcake?  Well, maybe, if it were somebody's birthday and someone's mom brought them in.  "Noooooo" is mighty fun.  But the idea of possibility...the "well, maybe!" of it all...that's even funnerer.  And that's the spirit I tried to put in this book, which was originally titled Well, Maybe (until the marketers thought, well, maybe something else).
A little boy has a pile of story books that he wants his mother to share at bedtime, but her reading seems a bit off. For instance,  take The Three Little Pigs.  Straw?  Yes.  Sticks?  Yes.  Bricks?  Yes.  Solar panels?  Nooooooooo! 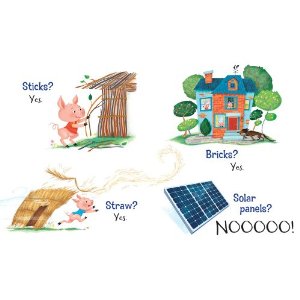 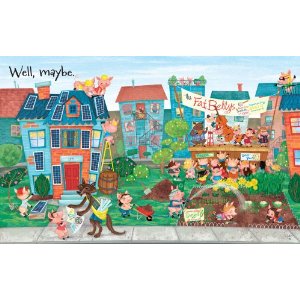 And so it goes.  Red Riding Hood has a basket and a wolf and a grandmother, but can she have a bottle of shampoo?  Well, maybe.  Goldilocks has porridge and bears and a bed, but can she have a television set?  Well, maybe.  Maybe Jack of beanstalk fame can have some spaghetti, maybe Hansel and Gretel may have a candy-filled pinata...but my favorite is Cinderella.  She can have a fairy godmother and a coach and glass slippers, but can she have a disco ball?  She can indeed, shaped like a glittering mosaic pumpkin, and her glass slippers are even 70's style, with goldfish in the heels.  The text is minimal, but oh-la-la, I could not have asked for more in an illustrator than I found in the great Elisa Chavarri, whose work I first saw in SANTA GOES GREEN

. I never met her and we never spoke directly in the process of making the book, as is customary in publishing.  She just went ahead and did what every picture book author dreams an illustrator will do: she ran with it, not just visually narrating the text but adding to it, creating two voices for the one song, both hers and mine.  I could not have wished for a more inventive, colorful, and beautiful execution.  She is totally the star.  The review periodical Kirkus said: "Her brightly colored...artwork is full of so many funny details that children will find something new with each re-reading.  This will certainly keep kids on their toes as they try to guess what is coming--no maybes about that."  Though my favorite review so far came from artist Tom Lichtenheld (DUCK!  RABBIT!

and SHARK VS. TRAIN

), who quipped that it looked "like a classic Golden Book, updated."  Sigh!  What could be better than that?
I am proud that, with the collaboration of our editor Emily, we have created a reading experience that will encourage audience participation, because that's how it was conceived.  I am also delighted that we can reinforce folkloric knowledge and divergent thinking in the zaniest of ways through this book.  But it's naughty, naughty, naughty to review one's own book, so I'll stop and now I'll leave that to you, or, more credibly, the intended audience: your children.  Enjoy!
Also of interest:

As the calendar begins anew, check out these picks that take children on a ride from January to December.  My go-to has been the classic OVER AND OVER by Charlotte Zolotow and illustrated by Garth Williams

(the artist behind CHARLOTTE'S WEB

), because I like a book that doesn't hurry along, and I can never get over the beautiful saturation of Williams' paint printed into the paper.  But I lean toward the old-fashioned, and modern children have more choices for exploring the cycle of the year.  Try:

ALL AROUND THE SEASONS by Barney Saltzberg (Candlewick, 2010), a chummy, cheerful rhyme that covers all the seasons, with generous cartoon illustrations and especially bright colors that capture everything from the pink of summer's watermelon to the cozy bronze light of a fall evening spent building a tent with chairs, blankets and a best friend.   A really solid early childhood choice, children will recognize and  look forward to all that's ahead in the year and in these pages.

is the most visually slick and modern in mood of the picks, capturing the anticipation..and near impatience...of a little girl who can hardly wait from one birthday to the next.  Luckily, there is plenty to celebrate in between, including a nifty stylized double-paged spread of a multicultural Thanksgiving dinner, the bright green of a St. Patrick's Day lawn, a sky full of Fourth of July fireworks, and a family framed in an Easter basket.  Each month is a present to be opened...almost as good as a birthday party.
And have a look at SO MANY DAYS by Alison McGhee, illustrated by Taeeun Yoo (Atheneum, 2010)

, more of a loving ode to all a child can be and do in the vein of Dr. Seuss's OH, THE PLACES YOU'LL GO! with the gentle affection of Sam McBratney's GUESS HOW MUCH I LOVE YOU

.  Nicely paired with books that look forward to the year, this will help children get January off on a most optimistic note.  McGhee's book features incredible print illustrations against a white backdrop that will appeal to fans of Jen Corace (LITTLE PEA

).  Yoo's artwork is available on etsy.com, and just check out this illustration to describe the text, "you are braver than you know." 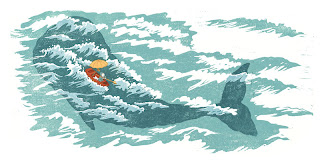 (And you are, you know.)  Happy New Year!
Links are provided for informational use. Don't forget to support your local bookseller.
More Esmé stuff at www.planetesme.com.

Esme, your Fairly Fairy Tales picture book sounds and looks brilliant! I can't wait to get one. This kind of book could only come from someone who knows kids. Congratulations.

Congrats and looks so creative and engaging!

I just checked out OVER AND OVER by Charlotte Zolotow from our library this weekend. My kids already miss Christmas and it provides a nice description of the sequence of holidays. The illustrations are simply adorable.

Your book looks wonderful! And I am so glad you posted about Over and Over. I adored this book as a child and I had completely forgotten about it until I saw the cover in your post.

Your book sounds like SO much fun! Can't wait to get my hands on a copy!!

I can't wait till I get my copy and read it to my students. It looks and sounds great!

I can't wait to share this one with my class (and your inspiration for the story)! ~Your right they love to correct me!

I love the ideas you have here! I'm a teacher, and can always use more suggestions and inspirations. Inspired by my students during a creative writing lesson, I've now started blogging a story targeted at upper elementary children. I'd love for you to check it out and give me feedback!

Congratulations on your new book - it sounds more than delightful. Yep, a certain small boy in our house will have his imagination running riot with all the maybes!

As I have seen the kids listening to the story teller, it reminds me of my niece. I am happy to see those kids. I would prefer to be the story teller to my niece and nephews. Thanks!

Congratulations!!on your new book.
I love your ideas which you have mentioned in the book, it's really helpful for children.

I just recently join your blog. The Fairly Fairy Tale caught my eye. I have nieces and nephews who always ask that maybe question. I like the idea behind your teachings of kids listening to the reader. I recently published a small children's book that I have read aloud to my family and just the laughter and excitement in their eyes as you read to them is priceless. Check out my blog regarding the book. I am ordering the Fairy Tale book for this Christmas. Thanks