THE BOOK OF TIME OUTS (NONFICTION) 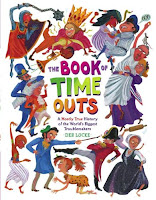 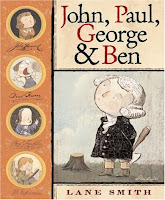 , and older kids can make reports of troublemakers of the 21st Century (there have been a few)

Almost everyone thought they didn't deserve a time-out. A few were right.

It's possible that one or two of our time-outers looked deep into their hearts and thought, "Maybe, just maybe, I did need to cool down a bit." We can't know for sure.

The one thing we can know for sure is that someday, somewhere, someone will once again be badly behaved, out of order,ill-mannered, inappropriate, or just plain unwilling to follow the rules. And they'll need a time out.

Let's just hope that someone isn't you or me.

I have long said there is a book for every occasion, and I thank this author for providing a perfect pick for the chill-out chair. (6 and up)

in grades 5-8 deserves to know
Links are provided for informational use. Don't forget to support your local bookseller.
Posted by Esme Raji Codell at 12:45 AM